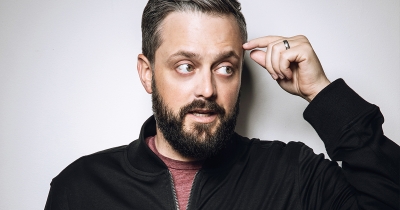 There’s an absolutely priceless story on standup comedian Nate Bargatze’s 2015 comedy special, Full Time Magic, in which he remembers when he got walked as 13-year-old aspiring baseball player, and how that walk almost turned into a home run.

To this day, it remains the crowning achievement of his short-lived athletic career.

Thankfully, he found his way to comedy, first moving from his native Tennessee to Chicago, where he worked briefly with the world-renowned Second City Theatre, before relocating to New York and launching his stand-up career in 2002.

He’s since released two comedy albums — Yelled at By a Clown and Full Time Magic — and has appeared multiple times on Conan, The Tonight Show with Jimmy Fallon, and the WTF Podcast with Marc Maron.

In 2017, he appeared on the Netflix comedy series The Standups, which lead to his own hour-long special, The Tennessee Kid, which premiered on the streaming service last year.

The special has changed everything for Bargatze, who has slowly worked his way up the comedy ladder with his distinctly understated delivery.

“It’s been the biggest leap I’ve had in my career,” said Bargatze. “You’re always just plugging along, moving along, and before it came out we were selling out some clubs. The Standups did great, but then this came out and now we’re doing these theaters. And I talk about it onstage, because it’s not like I’m getting recognized everywhere. But you can just slowly tell that it’s happening. Every week someone comes up and says something. So that’s the gauge.

Naming his latest theater tour The Good Problem To Have Tour, Bargatze is definitely appreciating his moment. Even if he doesn’t know exactly why it’s happening now.

Many of his most loyal fans, including fellow comedians like Jim Gaffigan and Chris D’Elia, can’t explain why Bargatze’s mix of carefully paced storytelling, relentless self-deprecation, and surprisingly clean comedy resonates with so many people either, but it just does.

“I’ve never made a big thing out of the fact that my comedy’s clean,” Bargatze said. “I think starting in New York, I would be clean at shows that were midnight shows, shows that were billed as uncensored comedy shows, and I would be clean on those shows and everybody else would be dirty. And I really just don’t address it. A lot of people don’t even notice, and that’s the best thing. That’s what I’m going for. I’m going for someone not to notice. Like, that’s the best compliment I can get.”

Even without making a big deal of it, some people certainly notice and appreciate it.

“I love when a family comes to a show, or I get messages of like dads being like, ‘You’re the only thing that me and my teenage daughter can listen to together.’ Because it’s true, there’s a point where your kids become teenagers, and they’re not your little buddy like they were, and they don’t want to hang out with their parents, so if you can give them something they can enjoy together, then it’s an awesome thing.”

Despite his own 7-year-old daughter announcing him at the start of his Netflix special, he said she probably doesn’t thinks it’s anything special that he’s a comedian.

After all, he didn’t think it was anything special that his own dad was a clown and a world-class magician throughout his childhood.

“I think I felt like magic was just something that was out there, like I thought everybody saw magic more than they did,” Bargatze said. “(So) she’s kind of like how I was. I don’t think she thinks it’s that crazy.”

On The Tennessee Kid, Bargatze turns to his extended family and mines out even more comedy gold, which he’s continued to develop in his new hour.

He also looked to his family experience as material for a sitcom pilot he worked on last year alongside fellow comedian Jerrod Carmichael. Although that show didn’t ultimately get picked up, he’s grateful for the experience.

“TV is almost like winning the lottery,” he said. “I was really proud of what we did. But it ended up going away, like most TV stuff that happens. But we’re trying to make another one for somebody. That’s the great thing with standup, is that you always have standup. You can always be doing that and continue to try to make these shows, even if all you get told is no.

“Almost every answer is no, so you just keep trying it until you get that one yes.”

Tweet
Published in Comedy
More in this category: « Behind The Vape Cloud: Comedian Aristotle Georgeson takes his viral online persona Blake Webber from Instagram to the stage Nikki Glaser: The Stand-Up Who Never Sits Down »
Login to post comments
back to top