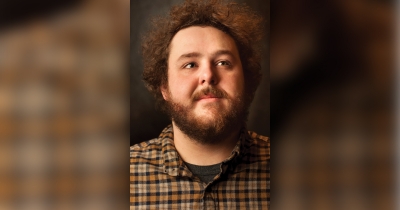 Acts like Saturday Night Live alum Chris Kattan, MTV icon Tom Green, Michael Ian Black, Nick Thune, Doug Stanhope and many others have made the 200-seat venue one of the premiere locations for standup in the area — and a hub for Kalamazoo’s own local comedy scene.

Fredericks himself got his start working his way up the underappreciated Kalamazoo comedy scene. First jumping onstage at a coworker’s going-away party, he did 25 minutes onstage in a barn — recorded on YouTube for posterity — of what he now describes as mostly what not to do as a comedian.

Fredericks stayed away from the stage for a year before trying again at a friend’s open mic held at a local bowling alley. There, he met many other Kalamazoo comedians, including Michael Burd, Jamie Perrin, Jen Dama, Andrew Vanhouten and Eric Steward,
who had started the Kalamazoo open mic scene at Louie’s Trophy House.

“Louie’s was where a majority of my early sets were performed,” Fredericks said. “Being the only spot in town and only having two shows a month meant it was hard to get stage time. It’s time that became even scarcer when word was getting out to other cities with comedians that wanted to hone their craft. This is where I met some of my oldest comedy friends, and to this day, it’s considered the heart of Kalamazoo comedy, with open mics every Tuesday.”

In March 2012, after about six months of actively performing, Fredericks said he received a call from Steward, who already had been working with a number of venues in Kalamazoo to produce open mic comedy nights throughout the week.

One of those venues was Shakespeare’s Lower Level.

Previously a comedy club called The Laughing Post, Shakespeare’s had wanted to work comedy back into its variety of entertainment for the Lower Level, and Steward asked him to host the new open mic there. That one-off opportunity has since turned into eight years, with Fredericks set to celebrate the show’s eighth anniversary this month, on March 19.

“I wasn’t sure what to expect having never hosted a comedy show before, which is honestly the hardest position on the show, let alone organizing a show,” Fredericks said. “I am glad that I had ultimately agreed, being a college kid with time on my hands, I had no reason to say no. I studied up how to host and through trial and error, the show and my MC abilities have evolved into what they are today.”

“I have a good amount of material about fast food, my weight and being a young single guy making poor life decisions, which I still enjoy telling,” Fredericks said. “I would say that my style of comedy now is coping with becoming an adult. I recently became a first-time father and lost my father to a sudden heart attack within a short time span. I am really in a transitional period of my life and I do find that my act is changing.”

Working on changing his life, Fredericks has put more emphasis on improving his health into his act, and has even started a Podcast called You’re Welcome, Future Self! about setting lifestyle goals. Currently, he’s 40 pounds into his first goal of losing 100 pounds.

While he’s been losing, the Kalamazoo scene has continued to gain, with many shows coming and going at bars and breweries across the city.

“In a given week, there are three to five chances to catch a show or get onstage in Kalamazoo, which is quite a bit,” he said.

Currently, there are regular comedy shows all around the city, at places like Louie’s, Shakespeare’s, Harvey’s on the Mall, YBar and Presidential Brewing, as well as Liquid Note and M-89 Sports Bar in Otsego.

“Sammi McCrorey is doing a ton for comedy in Kalamazoo,” Fredericks said. “She is the current host of comedy at Louie’s Trophy House and has been for the past two or three years. She is working hard to bring more stage time for local and regional performers at other venues such as Old Dog Tavern, as well as working with me on shows at Shakespeare’s.

“At Shakespeare’s, we do four or five open mics a year, with our focus on reasonably priced professional shows. We normally do a regional feature on the first and third Thursday, but fill in major acts on any other day throughout the month.”

More information about all shows can be found on the Kalamazoo Comedy Facebook page: facebook.com/kzoocomedy.

“I feel one of the most important things to building and broadening a scene is being open and inviting to new talent,” said
Fredericks. “The main challenge of having an underground comedy scene in our fantastic arts community is that it seems like no one was aware that it was going on.

“Once a week, I hear someone say, ‘I never knew you guys did this.’ It makes me happy to know that we reached a new person, but also makes me wonder how we could spread the word even further.”

Tweet
Published in Comedy
More in this category: « Nikki Glaser: The Stand-Up Who Never Sits Down Pat Sievert »
Login to post comments
back to top