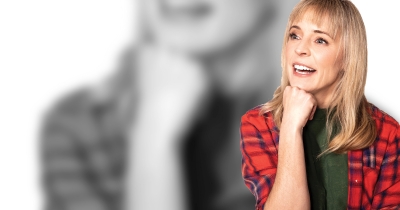 Being one of the most unique voices in comedy isn’t an easy job, especially when that distinct voice is both surreal and brutally honest. Told through unpredictable vocal inflections, the comic genius of Maria Bamford touches on hyper-personal subjects, like dysfunctional family issues, depression and anxiety.

Last year, she even debuted her new television show, What’s Your Ailment?!, another public move at removing the stigma attached to these common issues. But what was it that evoked the courage for her to publicly talk about her own story?

“Getting help for my own mental health and receiving the support and acceptance of other people,” said Bamford, who recently dropped her new hour-long comedy special, Weakness is the Brand. And she’s already working on the next special.

“Now, I’ll be beginning a new hour,” she said. “The picture has been painted. Bring on the new canvas.”

Of course, the touring comic continues to perform across the map in front of her dedicated fan base — but even she has some periodic rough shows.

“There are always new lows,” Bamford, 49, said of life on the road. “I have had a few MAGA-hat wearers yell at me and walk out, most recently. Ah, well! YouTube your comedian and check their political party before you go to a club — especially if you are a MAGA-hat wearer.”

But tough crowds are nothing new for Bamford: She’s been honing her craft since the early ’90s. After stints in improv groups, the Duluth native began her career in stand-up while wrapping up school at the University of Minnesota, where she earned a Bachelor of Arts in creative writing.

She cut her teeth the ol’ fashioned way, at clubs like Stevie Ray’s Comedy Cabaret, never looking back. As of 2020, she has stacks of comedy albums, and dozens of film and television credits, including Lady Dynamite, a Netflix series loosely based on her life.

Looking back on her first comedy set, Bamford said it came to her naturally.

“I don’t think I prepared too long,” she recalled. “It was at most a five-minute set. I’m sure I rehearsed it at least four or five times, as that seems to be my practice. I believe it went well or felt good, or I probably wouldn’t still be doing it.

“I didn’t know being a comedian was a thing until I was about 21,” she added. “But then it helped me to read The Artist’s Way and do all the exercises in that book in order to get clearer on what I enjoyed doing.”

Today, while she performs at some bigger rooms, she also still enjoys the vibe of a comedy club. “I love doing local shows with friends. The comedy community itself is pretty lovely, and I love to laugh.”

With so much material behind her, when asked if her comedy writing process or approach to the art has changed, Bamford of course offers up an honest answer.

“I probably have a poorer attitude and a bigger fear of failure,” she said. “I need to fight past my ego that I am starting at the beginning every time, just like everybody else. That it’s OK to bomb and take risks. I definitely have an ‘addiction’ to doing well, so when things are new or I need to rehearse for something to improve, I get grumpy — which is embarrassing.”

Since the local comedy scene is thriving in West Michigan, Revue asked Bamford to divulge some tips for locals considering taking the leap into stand-up. Her advice is simple, but bona fide.

“The same thing I try to tell myself everyday: Do it. That’s all there is,” she said. “That’s the fun part and the hard part and where any reward is. Stop talking about what it is or what’s good or who is better or worse. Do it, and you’ll be a part of it.”

And if you’re simply looking to discover comics to watch, Bamford is quick to rattle off a bunch of suggestions for you to Google.

“There are so many,” she said. “There is, of course, my veteran comedy pal, Jackie Kashian, who is extraordinary. There’s also Melissa Villasenor (SNL), Danielle Perez, Candy Lawrence and hundreds more. There are so many fantastic comics out there who identify as female.”