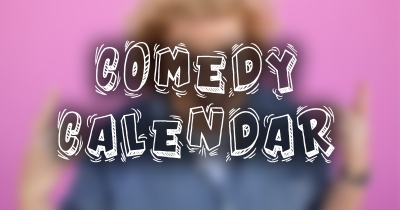 As LaughFest reminds us all that laughter is, in fact, the best medicine, we’ve gone and put together a roundup of comedy events happening all around West Michigan during the months of March and April. Leap up on the stage for an open mic night, take a class at The Comedy Project, see an improv show or reserve tickets to your favorite stand-up comedian — there are near endless ways to tickle your funny bone in West Michigan.

If you have always wanted to pick up that microphone and show West Michigan what you have to offer, there are plenty of open mic nights to join. Check out one or make a whole week’s worth of entertainment and schedule all of them on your calendar.

Every Monday night starting at 8:30 p.m., the Drunken Retort hosts an open mic night for all talents — whether you’re a poet, musician, singer or comedian. Held at Stella’s Lounge, this open mic and slam night also features a variety of performing artists from around the country.

Hosted by Kian Straub, this free night of local and regional stand-ups is held at the Tip Top Deluxe Bar and Grill. For ages 21 and older, Tuesday Comedy nights are performed every Tuesday at 9 p.m. with drink specials and no cover charge.

Held on the first Tuesday of the month at 8 p.m., Kava Kasa’s Open Mic Night is free to attend and open to any aspiring poets, comedians or musicians. Performers are encouraged to arrive at 7:30 p.m. for signs ups.

Celebrate hump day by sharing your best jokes at
Fulton Street Pub and Grill. Each comic gets at least eight minutes of stage time and receives two complimentary drinks for performing. Prospective comedians can sign up in advance or arrive early and put their name down to be entered in a drawing to go up.

Every Thursday night at 8 p.m., Dr. Grins Comedy Club features an open mic night at the B.O.B. Aspiring acts are encouraged to sign up before the show.

Once you get a taste of open mic nights, check out all that local comedy has to offer in West Michigan — from improv shows to comedy classes.

Featuring Andy Allen, Dave Lyzenga, Mike Ryskamp and Matt Sterenberg, Pop Scholars is a Grand Rapids-based improvisational team performing since 2009 at Wealthy Theatre. In the near future, this four-man comedy troupe has a LaughFest performance on March 6 at 8 p.m., as well as a comedy show on March 27 at 8 p.m.

Performing since 1993, River City Improv produces shows each month at the Wealthy Theatre and Listening Room at Studio Park. With each show starting at 7:33 p.m., upcoming showtimes include March 7, 14, and 28, and April 18.

Featuring some of West Michigan’s funniest comedians, Funny Girls performs regularly at The Comedy Project with game shows and variety shows. You should also check out Grand Rapids, the Musical!, a free show at Creston Brewery on March 7.

With shows Mondays, Thursdays, Fridays and Saturdays, The Comedy Project offers not only improv and sketch performances, but also classes for the community.

Returning for its 10th season, Gilda’s Laughfest takes place March 5 to 15 and features comedy showcases and family-friendly programming, such as Kids Rock Hip Hop Dance Party and the People and Pets Expo.

If you love bowling and laughter, there is nothing quite like the Back Alley Comedy Club, located in Rockford and Muskegon. Just check out some of the impressive comedians on the lineup:

This year, LaughFest is bringing in an especially impressive lineup of stand-up comedians who’ve practically become household names. For more info and to get tickets for any of these shows, head to laughfestgr.org.

Marking his third appearance for LaughFest, Jim Gaffigan will be at the Van Andel Arena to perform his act, The Pale Tourist, on March 5 at 8 p.m.

Performing at the Listening Room at Studio Park, Adam Cayton-Holland stops by to perform his Happy Place Tour on March 6 at 7 p.m.

Magician and comedian Justin William from Netflix’s Magic for Humans joins LaughFest to perform at Fountain Street Church on March 7 at 7 p.m.

The first comedian to ever get a Netflix stand-up special, Russell Peters is hitting the stage at DeVos Performance Hall on March 8 at 7 p.m.

Returning to LaughFest, Maria Bamford steps on stage at Wealthy Theatre on March 13 at 7 p.m. and 9:30 p.m.

Performing at Fountain Street Church, Fortune Feimster joins the lineup to perform her stand-up act on March 14 at 7 p.m.

On March 14 at 7 p.m., the “Queen of Clean” comedy marks her mark at the Fair Haven Church in Hudsonville.

On March 12 at 8 p.m., Gabriel “Fluffy” Iglesias stops by the Wings Event Center in Kalamazoo for his Beyond the Fluffy World tour.

Hosted by the FireKeepers Casino in Battle Creek, Larry the Cable Guy presents his Remain Seated tour on March 13 at 9 p.m.

On March 21 at 8 p.m., Chris Tucker performs his latest set at the Soaring Eagle Casino and Resort.

Held at the Holland Civic Center, Michael Carbonaro takes the stage on March 28 at 7 p.m.

Hosted by 20 Monroe Live, Trey Kenney performs his Are You for Real tour on April 20 at 6 p.m.