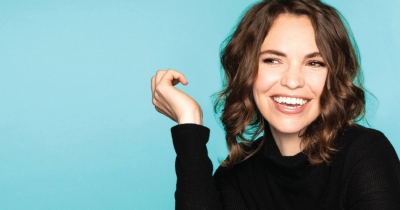 Before the pandemic changed everyone’s lives, standup comedian Beth Stelling had her own life-changing moment, when she recorded her first hour-long comedy special, “Girl Daddy,” now streaming on HBO Max.

“I’ve been telling abortion jokes since before I had one,” Stelling said. “It’s thanks to comics like Lizz Winstead and others who came before me that gave me the idea, and chutzpah, to even say it into a microphone. The words people don’t like to hear are deemed ‘off limits’ for a reason, and that reason is to silence and shame.”

Stelling started developing her distinct voice here in the Midwest, growing up in Ohio, and attending Miami University. Graduating with a degree in theater, she relocated to Chicago where she began doing standup for the next five years, and was named “Best Standup Comedian” by the “Chicago Reader.” She then moved to Los Angeles after the release of her first comedy album, “Sweet Beth,” in 2012, and made her television debut there on “Conan” in 2014.

“I remember a comic in Chicago named Steve O’Harvey who used to say you could taste the Ohio in my set, which I always liked,” Stelling said about how the Midwest has stuck with her. “No matter where I am, I stay me. And that means saying ‘pop’ instead of ‘soda.’”

Touring constantly, Stelling went on to have half-hour spots on Netflix’s “The Standups,” and Comedy Central’s “The Half Hour,” where she recorded her 2015 special, “Simply The Beth.”

She later went on to work as a writer on Judd Apatow and Pete Holmes’ acclaimed series “Crashing” for HBO, and Hulu’s “I Love You, America,” with Sarah Silverman, as well as appearing in the Amazon Prime Video Series “Red Oaks.”

Currently she has a recurring role as Ms. Fish on Peacock’s original series “Rutherford Falls,” alongside Ed Helms, although she added that standup scratches her former theater-major itch for acting most of the time.

“It takes acting chops to deliver written jokes like it’s the first time, every time,” she said. “And yet not all standup comedians are good actors. I sometimes get in my head about that since I don’t act super often, but I still audition when I can. I love playing Ms. Fish on ‘Rutherford Falls’ so much, and I’m grateful for the chance to improvise on set thanks to Sierra Teller Ornelas, the creator.”

Stelling had her own TV show in the works that she said didn’t get picked up, but she continues to write, working on movies like “The Man From Toronto,” “Puss In Boots 2,” and “Good Boys,” as well as shows like TBS’s “The Last O.G.” and the upcoming eighth season of Cartoon Network’s “Rick and Morty.”

“I think (writing) made me less driven in standup because I had a steadier source of income from writing and it has pulled my focus, but hey, I love both,” Stelling said. “Thankfully shows that hire me are very considerate of my standup schedule and allow me to keep touring. All I ever wanted to do was make money being funny.”

Collaborating with one of her closest sources of inspiration, Stelling co-hosted the podcast “We Called Your Mom,” with her own mom, Diane Stelling, where they would talk with the mothers of famous comedians and artists. The weekly podcast ran throughout 2020 before coming to an end in early 2021.

Stelling added that her mom has supported her standup career all along the way, and it was actually her family who inspired the title of latest special, “Girl Daddy.”

“She wanted me to be nicer to myself in my early standup years,” Stelling said about her mom. “Now I think she loves it, I mean she claims to be my biggest fan. She likes the title of my last special, ‘Girl Daddy,’ because her grandson made it up. He said his dad was his dad and my sister was his girl dad. And that made me think of the joke about being a male comic versus a female comic.”

Continuing to use her comedy to push back in her own way, including confronting her own past physical and sexual abuse, Stelling said her standup is therapeutic for her, and she hopes it is for others too.

“Nothing better than taking words said to me or experiences that hurt me and making a joke that makes people laugh about it,” she said. “Takes the poison right out.”

Tweet
Published in Comedy
More in this category: « Dr. Grins: Bringing Back the Laughs From Last to First: The New Kingpin of Comedy »
Login to post comments
back to top