After his sudden July 1975 disappearance from a Bloomfield Hills restaurant, notorious union leader Jimmy Hoffa was never seen again — dead or alive. However, his still puzzling story — one perhaps involving the mafia, kidnapping and murder — has since been etched into Michigan’s folklore.

While the 62-year-old Hoffa was declared legally dead in 1982, his captivating case remains unsolved. That’s where television hosts Ryan Bergara and Shane Madej come in. On a recent episode of their show, BuzzFeed Unsolved: True Crime, the duo delved into the perplexing Hoffa case in their signature conversational tone.

Opting out of the typical serious tone often used on true crime shows, Bergara and Madej dig into the Hoffa case — and many others — in a chill, chatty manner. Since the program debuted in early 2016, the duo has not only investigated bizarre true crimes, but also the paranormal on its sister-show, BuzzFeed Unsolved: Supernatural — which birthed Madej’s now famous dialog, “Hey there demons. It’s me, ya boy,” during one late-night ghost hunt.

Bergara (the firm believer and Fox Mulder-type) and Madej (the comical skeptic and Skully protégé) recently chatted with REVUE about their show, one of BuzzFeed’s biggest rating getters. Check out both shows for free on YouTube, but also on Amazon Prime Video and Hulu.

REVUE: The show has been gaining a lot of momentum over the past two years—how did it get started?

Ryan: When it started, it was me and another co-host, Brent Bennett. Brent and I used to carpool to work [at BuzzFeed] together and we found out that we had this weird interest in true crime and the paranormal. I was more of a believer and he was more of a skeptic. Eventually, we just started filming and recording these conversations and seeing if people would be interested in them. We did a couple tests and they did really well. It started out as three-minute audio interviews — you didn’t even see our faces. Those got really popular, so we started adding more meat to the bones of that. We went from three minutes to 20-minute episodes. Along the way, the original co-host didn’t like talking about those things as much, so he decided to pursue other things at Buzzfeed. That’s when I asked Shane if he’d want to work on it. He was already working on another series, but now he’s stuck with me.

Your show is divided into two different realms: True Crime or Supernatural. For the true crime episodes, you film mostly in-studio, but the ghost hunting is typically filmed at creepy locations across the map. Do you prefer filming one over the other?

Ryan: Despite my reactions, I like the paranormal one more. I actually like getting out to see the world, even if it is the grimier parts of the world. I enjoy travelling, I enjoy hunting for ghosts. True crime is fun but there's so much more research involved. You have to get down all the small details. Whereas hunting for ghosts is generally not as intense.
Shane: I’m flip-flopping between the two because after you do all the travelling, ghost-hunting, and breathing in so much dust, your lungs and your brain needs a break. It's a lot of late nights. It's a lot of fun, but it's nice to know that once we put a cap on that season, the next season we're going to be not going anywhere for awhile. Then you talk about murder and creepy stuff for so long that you're like, ‘Okay, that's enough murder, time to get back out there and do some ghost hunting.’

One of the creepier episodes was when you two traveled to that eerie little resort town in Northern California to investigate where the 1981 Keddie Murders happened. I recall watching you guys wander on the rubble of the cabin where the quadruple homicide occurred — seemed pretty unnerving.

Shane: We’ve been to ghost hunting locations where we might get creepy vibes, but that town … There are people living in that town, but we didn’t see any of them. The whole time, it felt like we were being watched while we were there.
Ryan: You could see evidence that people were living there. You could see smoke coming out of the chimneys, all the shutters were drawn. Every now and then, I felt like you could see people peeking out of their windows at us.
Shane: It was pouring rain and freezing while we were there. I think we had originally planned to shoot there at night, but I am sure glad we didn't.
Ryan: There’s also this terrifying prospect that this murderer has not been found in this town of 50 people. It very well may be one of those 50 people looking at us through their windows. It’s not the greatest thing to think about when you’re like, “Okay, let’s start talking about this case.”
Shane: There was a pretty explicit point where we were like, "oh, now it's time to go," because a man...
Ryan: A man that was in all camouflage gear appeared. I don't think he was hunting, I think that's just his outfit...
Shane: He was hunting for people. (wheeze)
Ryan: He went right by us, rolled his window down, and he looked at us with the sternest glare I’ve ever seen. He had eye contact with me for about 10 seconds. He rolled his window up and then drove to a nearby driveway.

With each episode, it’s clear you’ve done your homework on the subject. Do you both dig up facts?

Ryan: In the beginning, it was always just me. Even today, I’d rather keep Shane in the dark so he can react. Now I have a team of researchers who help me research so it’s not so intense. Every day I do a fair amount of research, just so I can find the smaller, weirder tidbits that might be a little fantastical. I check the message boards.
Shane: Ryan's really out there checking the boards … very dubious sources. 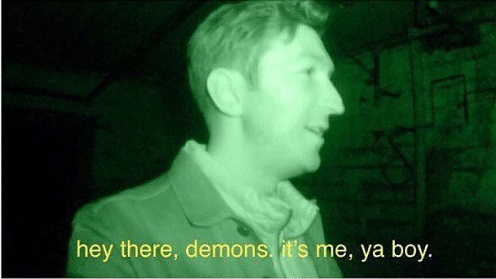 While it’s obvious Ryan is a believer in the paranormal world — Shane, you’re the skeptic of the two. Have you ever felt uncomfortable at any of the paranormal places, or felt a presence?

Shane: Not in the supernatural sense, only just in creepy surroundings sometimes. We often talk about when we went to Waverly Hills, which is an enormous rotting building. That was the first place we’ve gone to where the building was so physically imposing that it was terrorizing. I remember that we had planned to sleep in one of those giant hallways that just falls into darkness. Ryan had proposed, at some point in the evening, that maybe we should sleep on the roof. I said, ‘Yeah, that sounds like a good idea.’ In my mind, I was like, “I don’t want to sleep in one of those hallways … this is a nightmare.” But I don’t feel a presence at places. Ryan, I think, is believing less and less.
Ryan: Don’t project your thoughts onto me.
Shane: Ryan’s been very brave.
Ryan: Just because I've gotten braver doesn't mean I believe any more or less. It just means that I'm a little more hardened to it. My soul is callused now.

After shooting so many episodes, how do you go about picking new cases?

Ryan: Earlier on, I already knew a lot of the cases so I knew I wanted to do things on them. As we've gone on to more and more seasons, I’ve definitely had to dig through the internet a little bit more to find interesting places to visit or interesting cases to cover. Usually, it's just fooling around on the internet, trying to find something that interests me. Checking out how many twists and turns, or how many scenarios a case has.
Shane: One of the great advantages for Ryan and I—even before Buzzfeed—is that we were already creeps. I think we’re both victims of the Wikipedia wormhole, where we’ll be like, “Oh, I just spent three hours reading about serial killers," on a Friday night. We should be out with friends.

Why did you choose the Hoffa case for this new season?

Ryan: This is one of our most recognizable cases of the season. Every season, we'll do one case where anyone who has a basic interest in true crime will know it, and this is one of those. It's an interesting case. There are a lot of players involved. Mob cases are always fascinating to me.

Have you passed on covering a true-crime case because it’s too obscure?

Ryan: I would never pass on a case because it’s too obscure. There have been a few I’ve passed on because they're too upsetting.

Are there any ghost stories you’re hoping to feature one day soon? Any towns that welcome such paranormal tourism?

Shane: As far as supernatural, there's a bunch of places that we’d love to go. It's tough out there for a ghost hunter. There are a lot of places that don't want to play up the haunted aspect because that doesn't help them on their Yelp reviews.
Ryan: I would go to Gettysburg, but all of the town of Gettysburg is pretty anti-ghost investigation.

When you filmed in Point Pleasant, West Virginia, it seemed like they totally dig the Mothman legend — even have gift shops and whatnot.

Shane: They really embraced it.
Ryan: Some towns really lean into it, which I enjoy quite a bit — to be a town where a pillar of their commerce is based around an idea of a man with wings is amazing. The list of places where we'd like to go for Supernatural is a very long list. Who knows what’s next.