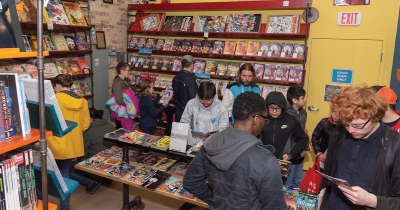 Now in its 19th year, Free Comic Book Day will once again sweep across the globe, dropping free and exclusive titles into the hands of first-time readers and true believers alike.

Many local comic book shops here in West Michigan plan to jump in on the action, with special giveaways, sales, contests and other promotions during the daylong event set for Saturday, May 2.

“There’s a specific set of comic books that retailers can order that are exclusive to that day and are totally free,” said Leah Schreiber, shop manager for Vault of Midnight in Grand Rapids. “Our shop orders a ton of copies and there’s books for all different types of interests. There’s superhero books, independent artists, all-ages books. There’s manga.

“It’s a really great time to offer comic books to anyone, whether you’re a new person or a longtime fan.”

Free Comic Book Day began in 2001, as a way to bring the ever-growing legion of fans lining up for comic book movies into actual comic book stores.

“Comic book movies are really accessible — and everyone has seen at least one, and most people love them — but a lot of people have not transitioned into actually reading comics,” Schreiber said. “So every day, we’re just trying to make sure that people feel welcome and comfortable if they want to try reading something new. And Free Comic Book Day is the perfect time to do that, because it costs no money.”

In past years, Vault of Midnight (95 Monroe Center NW) has had massive sidewalk sales with tents full of comics, thousands of fans and activities galore. This year, the store aims to focus on comics, by bringing back-issue bins outside for readers to peruse more at their leisure. There are also plenty of other festivities, including three different costume contests, trivia, photos with local cosplayers, prizes from local businesses and more.

“It’s a day to celebrate comics, but it’s typically hard to shop and take your time because there’s thousands of people in the store,” Schreiber said. “The line is usually fairly long, but we’re making some changes that help the rotation of people move a little more efficiently.”

In addition to events like Free Comic Book Day, Vault of Midnight has partnered with numerous coffee shops, restaurants, bars, and breweries for community outreach events, including monthly board games nights and larger quarterly events.

The store also works with a ton of local artists, offering a number of regional titles for fans to discover.

“With everything going so digital, it’s great to see that Grand Rapids has a really high appreciation for local creators,” Schreiber said. “Our shop specifically has a really awesome, thriving small-press section that is unique to Vault of Midnight.”

Opened in downtown Grand Rapids in September 2013, Vault of Midnight is now one of three locations for the Michigan-based comic book retailer, following its flagship store in Ann Arbor.

The store sells everything from new and rare comics to tabletop games, collectible figures, and other fandom-related merchandise.

Continuing to erase the stereotype infamously perpetuated by the likes of Comic Book Guy on The Simpsons, the staff at Vault of Midnight has found that comic books are far more social than some might think.

“We don’t necessarily see comic book culture as this closed, insular experience, because everyone is very open as soon as you walk through the doors,” Schreiber said. “Reading is such a private thing that you do on your own, but it’s such a shared experience.”

The staff prides itself on its customer service and Schreiber notes they work hard to make comic books more accessible to new fans of all ages.

“I did not read comic books before I started working at the store because I was so intimidated by them,” she said. “I was drawn to the store because of the energy of the staff that worked here and how comfortable they made me feel. And I definitely want to give that to other people because it’s affected my life in such a positive way, and I share that love of comic books now.”

Tweet
Published in Eclectic
More in this category: « Walking Through the World of Winter
Login to post comments
back to top