Well, it's officially December, which means the holidays are in full swing. Of course, after your 20th cup of eggnog and the umpteenth rendition of "Frosty the Snowman," a break from festivities may be necessary to keep from becoming a total Scrooge. Perhaps a trip to the theater would do the trick?

When it comes to rock, pop and soul, lots of musicians have undeniably cool nicknames: Bruce Springsteen is the Boss, Jim Morrison is the Lizard King, Michael Jackson is the King of Pop, yada yada yada. But how can you possibly hope to ever top the title of Screaming Eagle of Soul?

Charles Bradley, the only man deemed worthy of that avian title, is the subject of the new documentary Charles Bradley: Soul of America, which will screen at the UICA's theatre Dec. 6-19. Not only does the film serve as a testament to a performer's qualifications for such a moniker, it also tells the inspiring true underdog story of Bradley's rise to fame at the age of 62.

The UICA has featured many music-centric documentaries in the past, from A Band Called Death to Until the Light Takes Us. Nick Hartman, film coordinator for the UICA, feels that such documentaries do so well because they strike a chord with fans and shed light on aspects of musicians' careers fans might not otherwise ever see.

Charles Bradley: Soul of America covers the whole story: from a childhood filled with abandonment, poverty and harsh conditions, to his years as a James Brown impersonator and finally, his debut album, which instantly earned him floods of praise from fans and critics alike.

And it's no coincidence that the documentary's screenings at UICA coincide with the Bradley's live performance at The Pyramid Scheme on Dec. 8.

"One of the reasons I wanted to book this film was because I thought it was really good for the community and could tie together The Pyramid Scheme and the UICA," Hartman said."So people could go to the concert and then actually come see the documentary and appreciate the documentary that much more by experiencing Charles Bradley in person."

Tickets for the film are $8 for the general public, $4 for UICA members. For a list of scheduled show times and more info, visit uica.org/film. 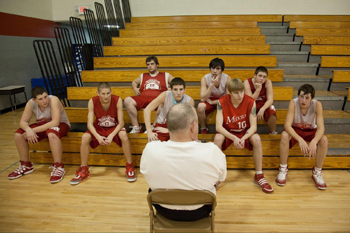 Don't worry sports enthusiasts, the UICA has you covered, too. On Dec. 13, UICA begins its run of Medora, a documentary focusing on a small town's varsity basketball team after an intense losing streak. Despite holding last-place ranking in their state, the Medora Hornets continue to battle through the season, for the love of the sport and town.

Andrew Cohn and Davy Rothbart, both directors of the film, felt the story of the Medora Hornets was one which needed to be told.

"We read an article in the NY Times and were immediately drawn to the story," Cohn said. "We decided that this was the film we were born to make. A year later, we found ourselves living in Medora; filming the players and their lives."

From the beginning, Rothbart and Cohn knew that this wasn't just going to be another film about sports. While the documentary closely follows the high school players through their season, the focus isn't so much on strategy and scoreboards as it is the personal lives of the players and the town they live in. Stories about fractured families, threatened communities and economic struggle take priority in the film. Cohn said it was their intention to bring the audience's attention to this small-town community as a whole.

"We hope people get a sense of what is lost when towns like Medora fade off the map," Cohn said. "We hope audiences can gain a better understanding of what living in a town like Medora is like through these players' eyes."

Following the Dec. 13 screening, co-director Davy Rothbart will be present a discussion about the film. Rothbart also happens to be co-creator and editor of FOUND magazine, a publication UICA has hosted events for in the past. It was partially because of this prior connection that Rothbart felt participating in the event made perfect sense.

"Both FOUND and UICA have grown in the past decade," Rothbart said. "We love their sensibilities, and their programming is top-notch. It's an honor to be featured at such a beautiful venue to share our film."