Mike Tremblay as Tome in "The Taker's Crown." COURTESY PHOTOS

Fantasy has always been near and dear to Josiah Swanson’s heart.

In fact, the director, producer and founder of the Muskegon-based WhiteShore Films lists The Lord of the Rings as one of his biggest inspirations for becoming a filmmaker.

“I used to read any book that had anything to do with mythology or anything in the fantasy/sci-fi context,” Swanson said. “That really helped to expand my imagination.“

For most of his life, Swanson utilized his imagination to create stories and films at home. Then, he went in 2009 on a brief hiatus, opting instead to focus solely on writing in an attempt to be pragmatic in his aspirations.

Still, Swanson couldn’t help but miss his days behind the camera. So he jumped at the chance when a friend asked him in 2011 to help out with a short film of his own, with Swanson taking care of the camerawork.

“While I was doing that I was like, ‘Wow. I can’t believe I miss it this much,’” Swanson said. “It kind of just got me back into it from there.”

This year, Swanson plans to introduce audiences to his very own Tolkien-esque world in the form of his new full-length film, The Taker’s Crown.

The Taker’s Crown follows King Wiglaf as he searches the land of Everwyn for the titular relic before it falls into the hands of the evil Titan thief Tome. Along the way, he assembles a team of heroes to help him in his endeavor to recover the crown and save the world.

“This universe I’m creating that surrounds The Taker’s Crown has kind of been my personal passion for the past four years now,” Swanson said. “Everyday, I just spend hours thinking about this universe and how I can develop it.”

Initially, The Taker’s Crown was intended to be a web series, but as Swanson consulted with friends and members of the local film community, he found everyone encouraging him to release it as a full-length film.

“I realized they were right and I had a feature-length script, so I might as well shoot it as a feature film,” Swanson said.

In order to create the film, Swanson enlisted the help of his WhiteShore Films production team, as well as a crew assembled from all over Michigan. The cast for the film, hailing from Detroit, were naturals in their respective roles since day one, according to Swanson.

“All these actors have completely blown my mind with how well they’ve done in their roles,” Swanson said. “They’ve surpassed all my expectations with where I felt this movie was going to go.”

That’s not all the state of Michigan had to offer — in order to create the diverse landscape of Everwyn, Swanson had to look no further than the borders of the Mitten State.

“I’m really looking forward to people seeing just how much of a variety of locations we really have in Michigan at our disposal,” Swanson said.

WhiteShore Films is currently finishing up post-production on The Taker’s Crown, with hopes for an April premiere date. Shortly thereafter, the company plans to submit the film to the festival circuit, followed by distribution. Swanson says it’s an exciting time for him and the rest of the WhiteShore crew, who is eager to see what waits ahead.

“When I started WhiteShore Films, I was just on fire for filmmaking,” Swanson said. “I immediately had these really big goals and visions for where I wanted to bring WhiteShore Films. We’re getting really close to being to those goals that I’ve held onto for years.” 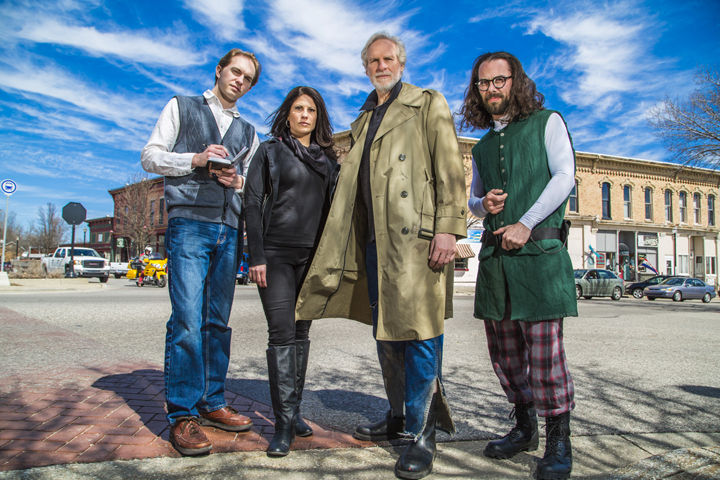 Other Michigan-Made Films to Watch Out For

If you just can’t get enough of locally-made films, here are a couple of other suggestions to check out:

First up is the short drama film Two for the Show. Produced by Lansing-based Rebel Pictures, this film follows one man as he returns to his hometown to visit his dying father. While home, he attends his high school reunion, which leads to a one-night stand that could change his life. Two for the Show has already won six awards on the festival circuit and is currently available to rent or buy on Vimeo.

If thrillers are more your thing, look no further than Vigilant Entertainment’s Scapegoat, in which a group of strangers wakes up in the woods and realizes they’re all being hunted. The members must work quickly to figure out what brought them there and how to survive. Scapegoat has a projected release for summer 2017.