Life After Death: After 10 years, ‘Bodies Revealed’ comes back to Grand Rapids 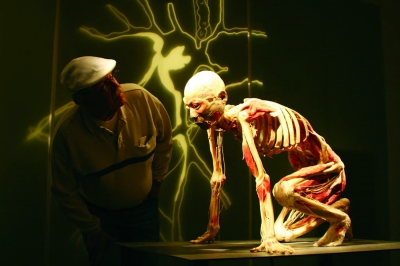 "Bodies Revealed." Photo Courtesy of the Museum and Premier Exhibitions

After almost a decade, the ever-popular Bodies Revealed exhibit returns to the Grand Rapids Public Museum. The exhibit, opening Nov. 16, gives viewers an inside look at the human body — a look both mesmerizing and uncanny. With 10 full body specimens and hundreds of organs, the display tells the story of each system within the body and provides information usually found only in textbooks.

The exhibit came to the GRPM for the first time in 2010, and since then has been in high demand for a return. Though it’s the same exhibit, brought by the same
company, GRPM Vice President of Marketing and Public Relations Kate Kocienski said visitors should expect some changes.

“Experiential Media Group has different versions of the exhibition that travel, so the specimens that will be coming to the Grand Rapids Public Museum this time are completely different than what was here 10 years ago,” Kocienski said. “The exhibit has been updated a little bit, so it will be a new experience.”

Although some variance is expected, the exhibit will carry the same tone and provide the same kind of atmosphere for visitors. If past hype surrounding the exhibit is any indicator, the 2019 Bodies Revealed is certain to be a popular, must-see display.

“I think people are just really fascinated with our own bodies,” Kocienski said. “The exhibit itself talks a lot about what you can do to make healthier lifestyle choices, and I think that’s appealing.

The exhibit shows a combination of healthy and unhealthy specimens, creating a stark juxtaposition. Kocienski notes some of the specimens show the effects of overeating or smoking, while other full-body specimens are in athletic poses to convey everyday motion and health. By looking at these specimens in contrast, visitors could see how certain lifestyle choices can affect their bodies. While the exhibit is interesting to look at, it’s ultimately something to learn from.

According to Experiential Media Group, the specimens are able to be transported and studied due to the polymer preservation process they endure. The bodies are completely real and are permanently preserved using liquid silicone rubber. At the end of the polymer process, the specimens come out dry, odorless and free of any toxic chemicals. Thanks to this process, they can be used for educational purposes, such as in Bodies Revealed.

Along with the specimens, the museum is working with several groups in the community to promote learning.

With the past popularity and demand for the exhibit — along with the growing West Michigan medical community — GRPM encourages people to purchase tickets in advance. These are timed tickets, meaning one must select a specific time to visit.

Be sure to see Bodies Revealed before it’s gone, as the next opportunity may not arise for another 10 years.

“It is something that if you aren’t going to medical school or nursing school, and aren't in the medical community, you wouldn’t have exposure to,” Kocienski said.

“I really think this is the only place that you can come to see these specimens outside of the medical community.”