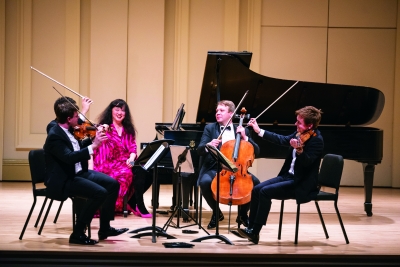 The renowned pianist was reminiscing about a night in 2012. She was at dinner with her husband, cellist David Finckel, and St. Cecilia Music Center’s executive director, Cathy Holbrook.

“The wings were amazing, and the beer delicious,” Wu Han said.

“We walked into that room and I thought, ‘My God, what a beautiful room.’ The acoustics, the old-world charm ... It was perfect for chamber music. When Cathy told me they only had two chamber music concerts per year, I nearly cried.”

Later, over dinner, Wu Han pressed her case for more shows. As co-artistic director of the storied Chamber Music Society of Lincoln Center, she was and is dedicated to facilitating performances of ageless music by world-class performers, and she knew a good venue when she found one.

“I’ve played everywhere. A few places stand out: London, Vienna, St. Cecilia,” Wu Han said. “It’s like a smaller Carnegie Hall. That high ceiling, the arch, the floors — it has everything you would want for chamber music. Grand Rapids doesn’t realize what it has.”

The partnership developed between Lincoln Center and St. Cecilia with a handshake that evening remains in place today. Wu Han took the idea back to New York City and began telling people there about what she had experienced.

Chamber music features a small group of instruments, each playing their own part. Writer Catherine Drinker Bowen described it as “a conversation between friends,” which is what makes it perfect for an intimate venue with stunning acoustics like St. Cecilia.

The first installment of this year’s series, Great Innovators, takes place Nov. 21. One of the innovators is Stravinsky, whose The Rite of Spring is said to have caused a riot at its premiere. That particular piece won’t be played, and audience members are cautioned not to riot, but it’s a testament to the Russian composer’s bold innovation. Works by Beethoven, Mendelssohn and Smetana will round out the program.

French Enchantment will arrive next year, Jan. 23. Pieces by Saint-Saens and Faure bookend the evening, with Ravel’s Sonata for Violin and Cello taking the center stage. With typical Gallic economy, the piece wrings 20 minutes of beauty from only two stringed instruments.

On April 30, Han and Finckel, with two other musicians, will perform in From Prague to Vienna. The evening will feature Brahms, Dvorak and Suk. The latter, a student of Dvorak, not only learned from the master but married his daughter. And Brahms and Dvorak had a lifelong relationship. Careful listeners may hear evidence of the closeness in the three pieces.

Wu Han expects to see familiar faces. St. Cecilia is an intimate venue, and the group of local classical music devotees is not a swollen one. Wu Han knows she’ll be greeted warmly.

Prior to every show, there is a pre-concert talk meant to help the audience understand the music they’re about to hear. Wu Han compares it to a primer on baseball, if you were to show up at a baseball game not knowing how the sport worked; you might enjoy it, but you’d likely be pretty lost as to the game itself. In a way, the talk is meant to explain the rules. After the performances, audience members have an opportunity to meet the musicians.

Attending, Wu Han notes, is “like two hours of an uninterrupted oasis.” Listeners will be free from the anxieties of breaking news, social media and the hectic pace of modern life. They will be able to lose themselves in gorgeous music in a room with top-shelf acoustics.