Casual Classical: West Michigan Symphony's 'Beethoven & Blue Jeans' is as accessible as it gets 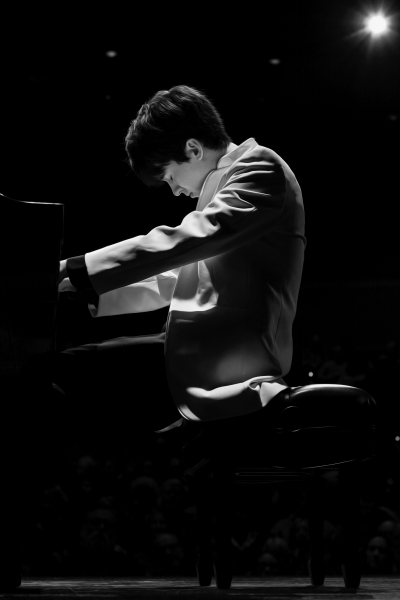 When pianist Charlie Albright isn’t on a stage performing, his go-to attire is blue jeans. He also enjoys taking the stuffiness out of classical music, so signing on for West Michigan Symphony’s Beethoven & Blue Jeans concert was a perfect fit.

Local fans may even catch him walking to the hall from his hotel room, down the street to The Block or grabbing a coffee in his jeans while he is in town.

“I am really excited for the ‘blue jeans’ aspect of this performance,” Albright said. “I am all for making concerts fun and accessible to everyone and for making music for everyone.”

Albright, billed as one of classical music’s brightest stars and a maverick on the piano, returns to Muskegon for the symphony’s Masterworks 2 concert. The program showcases the best of Beethoven, who turns 250 in 2020.

Albright performs the stormy Piano Concerto No. 3, which is paired with two other beloved works, including opener Coriolan Overture and the famous Symphony No. 5.

“Beethoven is perennially fresh,” said Music Director Scott Speck. “That’s one of the reasons that musicians and audiences love him so much. His emotions are powerful and direct. It’s like talking to a particularly volatile friend!”

The audience is encouraged to wear blue jeans for Beethoven & Blue Jeans, a special concert the symphony used to do yearly for several seasons. Speck doesn’t typically conduct in overly formal attire and will don blue jeans along with symphony members.

The show promotes the symphony’s central premise: Classical music is for everyone to enjoy. Speck enjoys the concerts, because “they bring new people into our family.”

“Beethoven’s music is both fun and serious,” Speck said. “But the atmosphere of the concert is lighthearted. We believe in stripping away, one by one, all the obstacles that are keeping people out of the concert hall in the 21st century.”

The audience is in for a treat, as well as some surprises, at the Nov. 8 evening concert and Albright’s Nov. 9 piano recital at The Block. The New York Times raves over his “jaw-dropping technique” and Albright is a skilled improviser who can compose a piece on the spot, based on suggestions from the audience.

During Beethoven’s Concerto No. 3, he'll improvise a bespoke cadenza — the piano solo at the end of the first movement of the piece — live onstage.

“It’s always a blast, because you really never know how it’s going to come out,” he said, “and there are no do-overs.”

Albright has performed the concerto many times with various orchestras, including the Seattle Symphony and the Chamber Orchestra of Philadelphia.

“It is a phenomenal piece that is not only exciting, but very deep with emotion,” Albright said.

Fans can see Albright’s skill up close and personal during his solo recital at The Block, where he will pick which pieces to play right at the piano. “Even I won’t know exactly what I end up performing.”

He’s also planning an in-depth improvisation, “maybe even a full-length, three-movement, 30-minute-or-so sonata that I’ll base on notes I ask from the audience …

“Talk about not knowing what you’re going to get beforehand!”

His goal is to make it a fun time of sharing a wide variety of music, from classical favorites like Chopin to brand-new music that comes together with audience participation.

“I’m a huge proponent of improvising live, of speaking to the audience and breaking down that invisible glass wall between the stage and the hall, and trying to make it an event where all of us — performer and audience — are spending time sharing music together,” Albright said.

Albright performed with the West Michigan Symphony a few seasons ago and said it was a fantastic experience. Speck and the musicians at WMS were “simply phenomenal,” the audiences were extremely welcoming, and it was the start of a great friendship with Speck.

Speck praised Albright’s style, professionalism and unpretentious attitude, which makes him a perfect guest artist for a laidback evening of classical music’s most beloved composer.

“His powerful and virtuosic style works beautifully in Beethoven’s Third Piano Concerto,” Speck said. “But Charlie also is wonderfully friendly, open to all. He is the opposite of a ‘diva.’ That’s exactly what we wanted for Beethoven and Blue Jeans. He has a style that connects with all audiences.”

Speck believes the great composers were spinning in their graves for about two centuries, to think that their awesome, life-changing music had been presented in a forum that was highly uncomfortable to all but a privileged few. As anti-elitist as they come, Speck said he feels it is the West Michigan Symphony’s duty to strip away the barriers to entry and expose everyone to the genre.

“You can wear whatever you want, and you can clap when the spirit moves you,” he said. “That’s the least we can do, and there’s much more where that came from. Beethoven & Blue Jeans is just one way we express that.”