Music in the Air: GR Symphony’s ‘Cirque de Noel’ is a showcase of acrobatics and holiday favorites 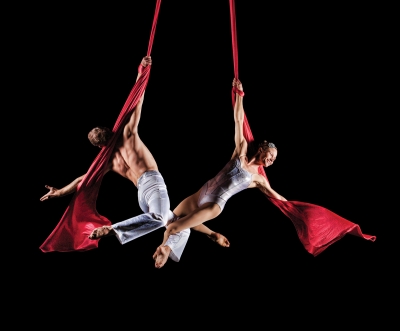 Classical Christmas music and flying acrobatics might not be the most obvious duo, but it turns out whimsical circus acts and our favorite holiday songs really are the perfect pair.

Cirque de la Symphonie is a company composed of talented and established acrobats, jugglers, contortionists, and aerialists. Included in their star-studded cast is nationally renowned acro-gymnast and aerialist Christine Van Loo. A seven-time consecutive National Champion and a previous Female Olympic Athlete of the Year, Van Loo brings years of experience and training to the company, which only rehearses once before each performance.

“The rehearsal is not for us to learn the show, because we already know our routines,” Van Loo said. “It’s basically to accomplish two things: It’s to get the orchestra used to having people flying over their heads, because it can be a little daunting and scary, and it’s also for us to hear the music, because sometimes orchestras play faster or slower or have a different ending. It’s really just to get us in alignment with each other.”

Although one rehearsal doesn’t seem like much, Van Loo said the performances are already choreographed and the performers are highly experienced, making for a fairly easy transition from one orchestra to the next.

With so much practice under her belt, Van Loo said her performance is second nature; the movements are practically done by muscle memory.

“It’s kind of like your brain turns off and your body turns on. Your body starts thinking for you,” Van Loo said. “It’s almost like if you would think too hard, you wouldn’t know what you were doing. When I’m doing my aerial act, I’ve repeated it so many times that it’s as natural as walking. So I don’t think. And when I do think, I kind of mess myself up. I just kind of let myself feel what’s going on and connect with the audience and let myself feel the movements and express myself. So it’s not really a lot of intellectual thought, it’s more like feeling.”

Van Loo has been a part of the show for 12 years, only a couple of years longer than the company has been performing in Grand Rapids. While the theme and tone of the performance are the same as in the beginning, the details are in a constant state of change. Not only does each show feature different acts from one year to the next, but each orchestra brings a different sound.

When it comes to intertwining the two art forms, Van Loo notes the symphony and the circus are a flawless match.

“As an aerialist, it’s not just doing an aerial act with music as background,” Van Loo said. “It’s like the perfect marriage of the two art forms. We choreograph to the music, so it’s not just an orchestra playing in the background. They are completely part of our show. It wouldn’t be the same show without the orchestra.”

While the show’s primary purpose is to entertain and bring forth holiday spirit, Van Loo ultimately hopes it leaves people feeling inspired.

“I just want people to feel like anything is possible and that they are capable of anything they put their minds to.

“I want them to go there and feel inspired and alive and excited, and just leave and be like, ‘Wow, if they can do that, what can I do?’”