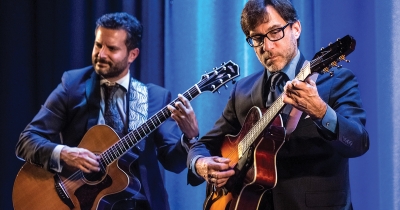 Two guitar virtuosos who first performed at The Block in Muskegon return to warm up a January weekend and play a lively and recognizable pops program with West Michigan Symphony.

Pops 2: Frank Vignola & Vinny Raniolo features “two short Italian guys from New York who play some amazing guitars together.” They’re ready to light up the Frauenthal Theater stage on the last day of January and take the audience on a musical journey.

“We have so much fun playing together—and I think audiences usually leave our concerts feeling better than when they arrived,” Vignola said.

Music Director Scott Speck said the West Michigan Symphony has not featured a guitar duo for well over a decade, but Vignola and Raniolo are more than great guitar virtuosos: They are highly accomplished entertainers.

“Their banter is alive with humor and they really involve the audience,” Speck said. “Adding them to the full symphony orchestra, the whole is more than the sum of its parts. I can’t wait for this explosive cocktail of Frank, Vinny and the great artists of the West Michigan Symphony.”

Vignola and Raniolo are solid guitarists in their own right, with extensive résumés and busy performance schedules. Together, they display interlocking rhythms, expressive range, and impressive guitar virtuosity, covering a diverse repertoire from Bizet and Rimsky-Korsakov to Led Zeppelin and The Police.

The pops program blends three kinds of works: pieces for Vignola and Raniolo with orchestra, a couple that they play as a duo, and orchestra standards that the symphony performs alone. They’ll open each half of the concert with Rimsky-Korsakov’s Capriccio Espagnol and Bizet’s Suite No. 1 from Carmen respectively.

Vignola and Raniolo gave “a dynamite duo concert” at The Block in March 2017, which prompted an invitation from Speck to play with the full symphony.

“They were amazing, separately and together, and the audience just roared,” Speck said. “As soon as we heard them, we thought, ‘Wow! We have to get them together with our symphony!’”

Vignola said it was an immediate yes. And then they got to work developing the pops program with Speck. “I think the audience will recognize just about every song we play.”

Malaguena is a guitar show piece. Tico Tico is a famous Brazilian piece from 1916. Other numbers include Walking on the Moon, Edvard Grieg Medley, and a Les Paul Tribute, with many of the pieces arranged by Vignola. A Rimsky-Korsakov Medley closes the program.

“I think my favorite piece and arrangement is the Rimsky-Korsakov Medley, which features Scheherazade and Flight of The Bumblebee,” Vignola said. “I also have always loved the song ‘Stardust’ by Hoagy Carmichael. You can’t go wrong with that song.”

As far as featuring the guitar with the symphony, like in any band, dynamics are everything. “I am sure we will mesh just beautifully,” Vignola said.

Speck notes it does take the right balance and acoustics to get the guitars to pair with the symphony and not have one overpower the other.

“In our case, in a big hall like the Frauenthal, we will lightly amplify the guitars, so balance is a breeze,” he said. “The furiously fast fingers of our soloists can be easily heard alongside the powerful musicians of the WMS.”

The guitar duo teamed up 15 years ago, when Raniolo auditioned for Vignola, who has performed with many of the world’s top musicians.

Vignola’s style is steeped in traditional jazz and swing guitar. He grew up listening to and playing along with records by Django Reinhardt, Charlie Christian, Bucky Pizzarelli and Les Paul, whom he worked with for many years in NYC.

“Because my style of playing was rather unique and not too many guitar players were playing in this swing jazz style, I was able to get the calls on many pop stars jazz recordings,” Vignola said. “Madonna recorded a record of 1920s songs for a film and she called me to play the rhythm guitar parts. That was pretty cool.”

As a rhythm guitarist, Raniolo boasts a global travel schedule that has taken him to 14 countries on three continents. He’s a performer, educator and familiar figure on public television.

In the past decade, the duo has performed well over 1,500 shows together in more than 15 countries and continues to remain busy. Music and the arts are important for any community, and supporters are encouraged to come out for an evening of music that might change your opinion of the symphony.

“This is our job and mission, to spread some musical joy so folks can get lost in music for a little while,” said Vignola.

Tweet
Published in Classical Music & Jazz
More in this category: « Music in the Air: GR Symphony’s ‘Cirque de Noel’ is a showcase of acrobatics and holiday favorites Crafting A Pint-Sized Performance: KSO's Craft Music series shrinks the symphony down »
Login to post comments
back to top