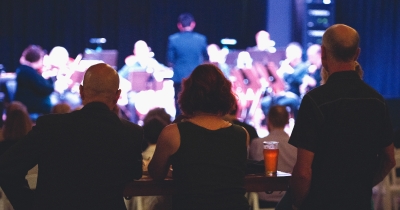 In the dead of winter, your soul may be yearning for some early springtime weather; with Michigan, you never know what will come. So instead of shutting yourself in and binge-watching the latest television series, join the Kalamazoo Symphony Orchestra for a special pint-sized concert at Bell’s Eccentric Café on January 15.

“Music brings warmth into people’s hearts, which you need in January,” said Daniel Brier, resident conductor for the KSO. “It helps you experience joy, sorrow and all the other human feelings. This is a chance to escape the daily grind, forget about all the daily worries and enjoy an experience where you are given the opportunity to play.”

In harmony with West Michigan’s craft beer scene, the symphony has concocted a cozy evening at Bell’s Eccentric Café by tailoring each musical arrangement to the strengths of its eight artists-in-residence. But being there to listen to the musicians doesn’t mean you’re not an equal part of the process, according to Julie White, KSO’s director of marketing.

“Concert experiences are co-created by everyone involved. Audience members are just as essential to crafting the experience as the musicians, which is especially true in a small, intimate setting like the Bell’s Back Room,” White said.

Modeled after salon orchestras in the early 1900s, the “Spring” Craft Music series will be a more casual performance than traditional concerts produced by the KSO. The smaller format enables Brier and the ensemble to talk to the audience between each musical piece, which allows for a deeper understanding of the stories behind the music and is not normally offered for settings consisting of larger audiences.

With most pieces ranging from 3 to 5 minutes in length, the symphony will play a few waltzes and polkas in addition to a wide assortment of compositions from Gershwin, Joplin, Bach, Ravel, and Strauss.

“You’ll hear some old favorites and maybe some new ones you haven’t heard before,” Brier said. “There’s also a lot of those favorite light classical pieces that they used to play all the time in the resorts in Europe back in the early 1900s, before recorded music was readily available.”

Brier notes Bell’s Eccentric Café is an ideal place to hold the symphony’s Craft Music series, designed for adults 21 and older—not only because you can grab a pint at your seats, but also because the environment allows for a relaxing evening for both audience and musicians.

“Bell’s is such a unique place to hold a concert, because you can grab a drink and make yourself comfortable,” Brier said. “It’s a more informal event where we can play music that is lighter and have a lot of fun on a weeknight. We also have a ton of fun onstage, playing music we love and seeing people dance in the aisles.”

Amid the early stages of development for next season, Kalamazoo Symphony Orchestra is planning future craft music series dates for fall.

While Brier assures it will be an enjoyable night, White adds that listening to classical music can be beneficial to the audience’s emotional health and physical well-being.

“There is nothing like a live musical experience,” White said. “Every note touches you. You can feel the rhythms. You can see how physical the performances are and you can hear reactions along with the music.

“Everyone responds differently, but that’s what makes it special.”

Tweet
Published in Classical Music & Jazz
More in this category: « Not A Snoozer: Electrifying guitar duo returns for pops program with West Michigan Symphony Exchanging Energy »
Login to post comments
back to top