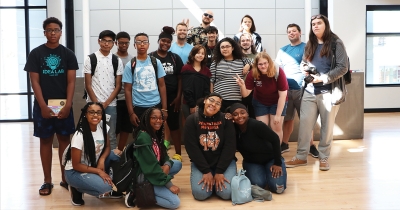 At the end of 2018, the West Michigan Center for Arts and Technology made a big move, taking over more than 20,000 square feet of space in the building that houses the Bridge Street Market.

This manifests in their Workforce Development programs, their Step Year program for recently graduated students, and their Teen Arts and Technology Program, which is “isn’t necessarily about creating a whole army of professional artists. It’s about using the arts and technology as a platform to help young people explore the world around them.” The organization works hand-in-hand with Grand Rapids Public Schools to give students access to professional equipment and copious opportunities to make art.

The Teen Arts and Tech Program follows students as they make the big leaps from each stage of schooling, from middle school to high school and college, guiding them along the way and supplementing the experiences their schools already provide.

WMCAT keeps in touch with students after they leave, following up on how they’re doing. Williams said it’s definitely rewarding, citing an example of three young men of color who went right from WMCAT to Ferris State University’s videogame track. They told him they feel extra prepared because they’ve already had access to those experiences.

Last year, the group put together a project centered on bullying in the LGBTQ community that brought many of the departments together — scriptwriting, costume design, fashion design, photography, graphic design, filmmakers and more — all resulting in an ’80s-
style horror movie called Weed Killer.

The program’s real goal is to “build creative confidence” in students, teaching them that “it’s OK to try things and it’s OK to fail, and it’s OK to make and it’s OK to explore, and that all of that, that helps us grow as humans,” Williams said.

That ability to understand people, to slow down and observe and ask questions, to be willing to try things, is a skillset that is transferrable to anything we do, especially when innovating.

Whoever it’s helping, WMCAT does important work — and they do a lot of it. To help support this work, the organization throws its annual iBall, a huge party at 20 Monroe Live involving live music, fun art-based activities and awards for excellent community partners.

The idea isn’t just to have dinner and a speech, but to get people involved and connected. This year’s iBall, on March 5, will feature KJ & The Good Time Family Band, with awards going to Urban Core Collective for Imagination, West Michigan Hispanic Chamber of Commerce for Innovation, and Joshua Peoples Inspiration. Last year, nearly 400 went and screen-printed their own T-shirts, worked together on communal art, and made connections over drinks and appetizers.

“It’s about getting to know somebody, and it’s about creating and making, and I think that really comes across when you come to the event,” Williams said. “And having live music, having artists there making things and you can do stuff alongside them, it’s something that I think is unique to our program and is really fun.

“It’s a great opportunity to come in and get connected and build social capital and see what’s happening in the community.”

Tweet
Published in Revue Arts
More in this category: « Life After Death: After 10 years, ‘Bodies Revealed’ comes back to Grand Rapids Performing Off-Stage »
Login to post comments
back to top