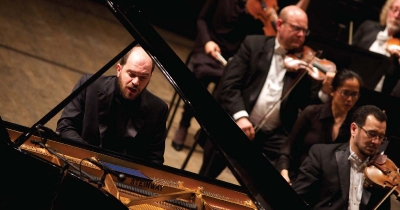 This year, Ludwig van Beethoven — one of the most highly renowned composers of all time — would have turned 250 years old, if only he had the gift of immortality.

In his 56-year lifespan, Beethoven wrote five piano concertos, nine symphonies and 32 piano sonatas, all while changing the landscape of classical music. Although he made his imprint many decades ago, Beethoven’s music is as compelling and timeless as ever.

“Beethoven, he was a genius, and in a way one of the most important composers of the end of the Classical Period and beginning of the Romantic Period,” said Grand Rapids Symphony Music Director Marcelo Lehninger.

“People associate Beethoven directly with classical music, and the fact that it’s his 250th anniversary is something that is very, very important for the world of classical music. Everyone in every corner of the world is celebrating his legacy and his music.”

The Grand Rapids Symphony is celebrating Beethoven through multiple performances this March, which happened to be the month of Beethoven’s death in 1827.

The first performance, Beethoven’s Pastoral, is being held March 6 and 7. This performance is centered around nature and will include Beethoven’s Sixth Symphony.

“It is about nature,” Lehninger said. “You hear the birds in the symphony, you hear water, so you hear all these nature elements of someone who is basically immersing himself in nature.”

Along with this piece, the performance will include Debussy’s “Prelude to the Afternoon of a Faun” and selections from Villa-Lobos’ “The Amazon Forest.”

Later in the month is when the 250th birthday party really begins. On March 27 and 28, Beethoven Celebration — The Five Piano Concertos is unlike anything the Grand Rapids Symphony has ever put on. In two nights, all five piano concertos will be performed.

“A lot of orchestras, what they do usually is the so-called ‘Beethoven cycle,’ where they use the season to perform all the symphonies he wrote; all nine of them. We, here in Grand Rapids, we decided to stay away from that,” Lehninger said.

In breaking this tradition by opting to perform the five piano concertos, Lehninger notes more variety is provided to the audience throughout the season. Additionally, Beethoven’s style is split into three different periods, and the five concertos show his full arc throughout those periods.

All the music will be played with pianist Kirill Gerstein, which is no easy feat. Lehninger said this kind of performance is extremely draining physically, emotionally and intellectually. Luckily, Gerstein is ready for the challenge.

“To embrace a project like this, there are not a lot of pianists that do play all the five concertos and that would actually play all of them together in two nights. Not a lot of people have the courage to do that,” Lehninger said.

“I performed with (Gerstein) before, so we know each other and work well together, and he is one of the leading pianists of the young generation today, performing with all the great orchestras and doing major recordings all over the world. So (he’s) a very important artist and we are all very thankful and honored to be receiving him to do this project with us.”

Individually, each night will be a special music experience. Together, the performances will be momentous.

“Of course, it would be really interesting if people attend both nights, because I think that will bring a really unique experience in their lives for the weekend of one of the major, if not the major composer of classical music,” Lehninger said. “But if for any reason people can only attend one night, they will have equally a great musical experience.”

While Beethoven’s story is undeniably remarkable, one of the most interesting aspects of his life is how he committed himself to music even after becoming completely deaf.

“You’re a musician, you’re a composer, and what (losing your hearing) does to you emotionally, it’s so powerful,” Lehninger said.

“For me, the most beautiful message that one can take from having a Beethoven experience is humanism,” Lehninger said. “A lot of people, even though they say, ‘Oh, he was a really hard person, a really hard personality, he was mean.’ Yes, he was, but he knew that and he suffered with that. In his mind, in his dreams, we should all be brothers, we should all be together. It’s a message of love, basically.

“I think that’s what you take from the experience of attending a Beethoven concert: In the end, he’s sending a message of love.”

Tweet
Published in Classical Music & Jazz
More in this category: « Melodies in the Museum Sensations in the Spotlight »
Login to post comments
back to top