Sensations in the Spotlight 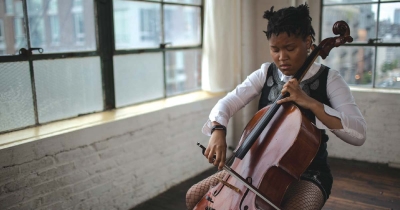 It’s rare for West Michigan Symphony to feature mostly American music during a masterworks concert. It’s been even rarer for a symphony to highlight African-American composers.

Not only will the 13 Masterworks III concert showcase acclaimed cellist Sujari Britt, it also pairs the blues-infused William Grant Still’s 1930 Symphony No. 1 “AfroAmerican” with Saint-Saëns’s Cello Concerto No. 1, and Florence Price’s Dances in the Canebrakes.

Music Director Scott Speck said he has heard amazing things about Britt for years, and WMS has wanted to feature the Saint-Saens Cello Concerto. He is excited to work with Britt for the first time, and they will warm up a week before her West Michigan appearance when she performs with Speck’s Mobile Symphony Orchestra.

Composers Still and Price were both from Arkansas and knew each other, leading Still to create the orchestration for Price’s Dances in the Canebrakes, which was originally a piano piece. Meanwhile, Saint-Saens’ music is tuneful, virtuosic and delightful, so the concerto felt right to place between these two American masterworks, Speck said.

“Some of her music was indeed hidden away,” Speck said. “For example, several of her scores laid undiscovered in a box in an old house until the new homeowner stumbled upon it.”

Still’s AfroAmerican Symphony is considered “one of the great American symphonies of all time,” rich in gospel, blues and classical symphonic influences. At one time, the 1930 work was among the most frequently performed symphonies in the repertoire.

Despite being dubbed “the Dean” by his colleagues, Still faced racial discrimination on his rise to becoming a successful arranger and composer in Hollywood.

“In the case of William Grant Still, it’s a more complicated story,” Speck said. “I’m sure that institutional racism played a big role in the neglect of his music.”

It’s exciting now to have a talent like Britt in a show featuring these pieces. The young cellist was featured on national news stories by age 11, has been featured in both Strings and Time magazines, and won the National Young Musicians Concerto Competition. Speck describes her as a beautiful musician, an extremely deep thinker and a delightful personality.

“I think our audiences will be spellbound by her musical spirit and glorious playing,” he said. “Sujari loves to do outreach, and I’m thrilled that we’ll have the opportunity to introduce her in several venues around the community.”

From a very young age, cellist Sujari Britt was attracted to the resonant depth of the cello because “it reminds me of my own strong voice.” At 18 years old, Britt has “set infinity as my limit with classical cello,” and she intends to indulge her dream.

Billed a child prodigy and rising star, Britt makes her West Michigan debut when she performs March 13 at Frauenthal Center. Her visit includes performances for local school groups and a solo recital March 14 at The Block.

Her talents have taken Britt, a native of New York City, to Finland to pursue a master’s degree in cello performance at Sibelius Academy.

We talked with Britt about her love for the cello and music as a whole.

What do you enjoy most about playing the cello as well as performing?

For me, music is both magical and powerful! Studying, practicing, composing and performing is an essential part of my being. As a student and performer of classical music, it is my joy to share and promote the art. My ardor is to inspire and to broaden interest and enjoyment in classical music across the globe through my dedication to cello.

You’ve been described as a child prodigy. When did you first realize you had a special talent for cello?

My parents introduced classical music since before I was born. When I think back to my earliest memories, I cannot remember ever not having music as a part of my day.

My parents also deliberately incorporated the study of classical instruments and musical history and theory into our homeschooling program. I took piano lessons at age 2 and received instruction on classical guitar and violin. I insisted on the cello with repeated pleas to my parents; they relented and started my lessons at age 4. My relationship with classical cello — and with music more broadly — has deepened ever since!

Can you talk a little bit about Saint-Saëns’ Cello Concerto No. 1?

The Saint-Saëns concerto is complex, emotional and full of energy! The piece travels quickly through a wide range of emotion. The first note of Concerto No. 1 is almost the most important note because it sets the tone of the piece: Fiery and strong. Concerto No. 1 starts out fuming and then shifts to thoughtful quietude and melancholy. After a series of strong emotional discourse, the piece ends in seeming energized release, and ultimate peace. Technically, it is a challenging piece because it involves so many different kinds of bowings and really difficult fingerings.

Is there anything you want to say about your workshops with local school groups?

I am sincerely looking forward to engaging with students on this tour! Taking music to schools and sustaining its presence there, is a worthy endeavor — now more than ever. Classical music should be a routine part of every child’s educational experience for the important contributions to academic enrichment, among other rewards.

How do you think these experiences will have an influence in your future? What do you get out of this?

I consider myself to be a missionary of classical music. I take pleasure in sharing myself through classical cello, and I appreciate every opportunity to engage enthusiasts and new listeners, alike. It is my mission to join in widening the scope of human dialogue through my prowess on cello. Music is alive for me, especially when I share it with willing ears. Personally, I am deeply committed to classical cello. In this realm, my very self soars!

Is there anything else you want to say to get audiences to come out?

Repeated demonstrations suggest that exposure to classical music is associated with healing, higher IQ scores, increased ability to learn, enhanced feelings of self-worth, and a sense of community and commitment. No less important, music can help to foster an appreciation of multiplicity and a regard for our shared traditions and experiences, all the while importantly enriching aptitude and character.

Come out, sit deep, and take in the love that Saint Saens promises in Concerto No. 1!