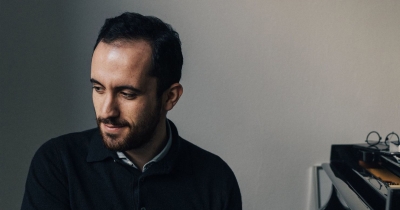 When a festival that only takes place every two years was scheduled to begin at the peak of a pandemic, you don’t just throw it all away.

The 2020 Gilmore International Keyboard Festival was cancelled last month, much to the dismay of its organizers, performers and fans, but it’s what had to be done. Still, with dozens of the world’s best musicians on the lineup, the Gilmore had an opportunity to make something of the tragedy.

“It took me a while to pick myself up from the floor,” said Gilmore Director Pierre van der Westhuizen. “But right after we cancelled, I had said it would be great if we could livestream a few things. Then I started to see that pop up all over the place.

“Why don’t we celebrate the festival at the time it was supposed to start and come up with something new and exciting instead of focusing on what would’ve been?”

This week, on the day when the 2020 festival would have begun, Virtually Gilmore launches in its stead. Beginning Wednesday, April 22, you’ll be able to watch a new performance from a master pianist every day for two weeks.

These exclusive performances are a mix of live premiere broadcasts and recordings of Gilmore performances from the past few years, spanning a variety of genres including classical, jazz and Latin dance music.

Starting on Wednesday, the festival will put up a new recorded performance to watch each day — check their Facebook and YouTube channel to see those.

For those who don’t know, the Gilmore Artist Award is a $300,000 award given every four years to an international pianist to further their artistic career. Levit was chosen in 2018 for his talent — “astonishing … surpassing all expectations of seriousness and excellence,” according to one Revue critic — and outspoken humanist perspective.

As such, Levit is going to great lengths to make sure his Virtually Gilmore performance is of the highest caliber.

“He said he’d love to perform, but if he’s going to do it for the Gilmore, he wasn’t going to do it from his living room,” van der Westhuizen said. “He wanted to do it from a professional setting so that we make it a really premium, high-definition experience for people. He’ll be in a studio booth by himself, separated from the engineers so everybody keeps their distance and that stream will then be broadcast. It’s a big production.”

The Gilmore shipped equipment to the other live performers as well, so you know you can expect the quality to be top-notch for every show. Grab your best pair of headphones and escape into the magic of music, van der Westhuizen suggests.

As much of a blow as it is, the Gilmore is excited to see how this experience shifts the conversation.

“We were kind of thrust into this, but I think everybody is rethinking. People are really beefing up their capacity to do this sort of thing. I think there we’re going to see some innovations out of this.

“Wouldn’t it be great if the next festival, you could put on your VR goggles and be right here with us, in the future?”

For now, the Gilmore is being flexible and nimble on its feet. Every other year, between festival years, the organization hosts a few master pianists and rising stars. The hope is to shift many of the 2020 festival performances to the 2021 season and really beef up that off-year. Regardless, the full festival will be back in 2022.

In the meantime, when asked who should tune into Virtually Gilmore, van der Westhuizen said, “Everybody!”

“This is such a great time, if you’ve never attended a piano recital, what better way to experience one for the first time,” he said. “The quality of the broadcast is fantastic. You don’t have to worry about how you’re dressed, come in your undies — I don’t care.

“I just hope that, this helps people get to know who we are, so that by the time the next performance rolls around, we get to meet some new people. There will be a real hunger for people to be together again, and I’m excited to be a part of that.”

To watch the performances and see the full lineup, head to thegilmore.org.

Tweet
Published in Classical Music & Jazz
More in this category: « Sensations in the Spotlight Bridging the Gap »
Login to post comments
back to top