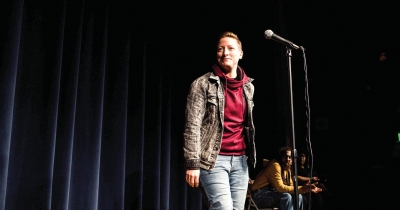 Rachel Gleason knows the benefits of crowds. She should, at this point: She’s performed in front of enough of them.

After graduating from college and while reeling from a breakup, she considered moving out of West Michigan and to a bigger city, somewhere with an art scene — somewhere she could perform. Spoken word poetry was her passion and there didn’t seem to be much of it around.

A friend of hers mentioned something seemed to be happening at the B.O.B.; a poetry thing. Gleason decided to check it out. What she found was what she had been looking for: a place where the spoken word was taken seriously. She went every week. And in time, she got up onstage herself.

Maybe she didn’t need to move to the big city, after all. She had something to keep her busy here. “I performed my ass off.” She wanted to prove she had the talent and the drive needed to build something.

Along with Marcel Price, who performed as Fable the Poet and is Grand Rapids’ current poet laureate, Gleason helped nurture a small community of spoken word poets and fans. Then they made it bigger. Today, they are the two full-time employees of The Diatribe, a local nonprofit organization whose mission is to promote self-expression and social change through poetry. They built something together.

“I got to be on the ground floor of something.” It was powerful.

Gleason knew something about the power of groups, for better and for worse. Raised in a fundamentalist church, she was commanded to speak in tongues as a child; later, at 13, she was hailed as a prophetess. She remembers watching as members of the church attempted to exorcise her father’s homosexuality from him and remembers the fear she felt when she discovered she, too, was gay.

Spoken word allowed her to step into herself, unapologetically. “Being a poet has given me my real voice,” she has written.

It’s given voice to others as well. The Diatribe doesn’t just ask for audience members to come; it also goes to them. It goes into schools, educating young people about the spoken word and giving them the chance to try it out themselves.

Gleason remembers getting a text from the mother of a student who was practicing for her own performance and how that student stepped onto the stage, read a line from her notebook, flung it aside, and performed the rest from memory.

“There are moments like that every time.” Moments in which students whose teachers knew them only to be quiet and passive managed to assert something of themselves. It was beautiful. And it happened more often than she could believe.

But the schools are closed now.

For the first time in its history, Diatribe will be offering an online spoken word and writing workshop. It’s not for the uncommitted; it’s a nine-week course, occurring every Tuesday from June 16 to its culmination in a Facebook Live performance on August 11. It will be divided into two courses: one for beginners and one for more advanced students, some of them adults. Assuming enough adult interest — and there has been some already — there may be a separate adults-only course.

It will cost participants nothing and, for the first time, it extends Diatribe’s reach beyond Kent County. Any Michigan resident can participate.

How do you write? How do you edit? How do you take something you’ve honed, and sanded, and polished, and read it to others? Not just read it, perform it, give it the delivery that it deserves, and not to your mirror but to the world?

Should the workshop succeed, it will answer those questions. And Gleason expects it to succeed.

“We’ll lose something by it being virtual,” she said, “but we’ll gain even more.”

Already, interest has been strong. Gleason’s been heartened to see interest from outside the county limits, interest from residents of small towns, who, like her, may have thought they would have to move to the big city to find something like this. “The more different kinds of people participate, the more perspectives you have to learn from. This really opens it all up.”

And this is spoken word. You can’t fish virtually, or box virtually, but you can perform virtually. You can give feedback and receive it, you can put yourself out there, and you can get better.

For some, that will mean becoming better at the craft. And that’s fine. But for others, for those who, like Gleason years ago, are learning who they are and who they’re done being, those words might have an entirely different connotation. You don’t need a stage, in the end. You can find yourself through all sorts of ways.

If you'd like to participate, you still can by contacting Gleason at rachel@thediatribe.org.