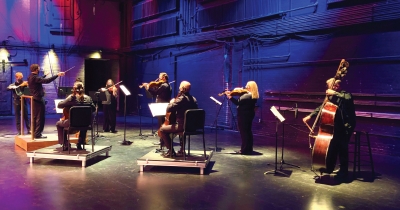 When the COVID-19 pandemic first hit, performing arts organizations had to halt operations, hit the pause button on planned concerts and call off travel plans for guest artists.

West Michigan Symphony was no exception. But instead of scrapping its season, the organization’s leaders and musicians got creative to present holdovers from the 2019 – 2020 season in a virtual format.

Selections include “Down by the Riverside,” “Battle Hymn of the Republic,” “He’s Got the Whole World,” “When the Saints Go Marchin’ In” and many more.

“We have eliminated all wind instruments — except his trumpet — from the concert, so it will be strings and percussion only, and everyone will wear a mask at all times, except Mr. Stripling while he is actually playing,” said Executive Director Andy Buelow.

Speck said the first two video concerts “have gone beautifully” and credits the forward-thinking advocacy of Buelow, and the highly specific advance planning done by VP of Operations Gabe Slimko.

“We decided to do this to maintain a strong and tight connection with our two most important constituencies: the musicians and the audience,” Speck said. “We wouldn’t exist without either.”

As an accomplished conductor, Speck said the coronavirus has created a “devastating landscape” for the performing arts, yet he has never been prouder to work with the symphony.

“The West Michigan Symphony is among the most nimble and forward-thinking organizations I’ve ever been privileged to work with,” he said. “We feel that the whole board, staff, orchestra and community are behind us.”

In June, the symphony gave the idea a test run with only nine string players and Speck, due to the 10-person restriction for indoor work functions at that time. Everyone had their temperature checked and wore masks, and the players were spread out on the stage with 6 feet between them.

“This made it trickier to get certain musical passages together, but we solved that challenge during our rehearsal time,” Speck said. “The other biggest challenge was not having the audience in the room with us.”

Speck notes the audience has a critical role in the feel of a live concert and that the music-making is a two-way process, so adjusting to an empty theater took some visualization.

“In order to play our best, we had to imagine that they were there. And not just any group of people, but the West Michigan Symphony audience, which has a very special and specific character. Once we did that, we found that we were able to perform at our best.”

Buelow said the goal was to test the technological parameters for staging a “live,” pre-produced video concert and gauge the response of the symphony’s “most loyal and forgiving audience.”

“Although this was not a simulcast, it felt like a live event, and the quality was much better than we could have done with a live streaming,” Buelow said. “That being said, the performances themselves were all ‘live’ first takes — there were no stop-and-do-overs.”

Video webcasts are free to single concert ticketholders and subscribers who did not request a refund during the regular season. Virtual performance passports can still be purchased for $50, which obviously works for the whole household.

For those who haven’t watched yet, these concerts are a great way to enjoy the sounds of the symphony from home.

“It’s fun,” Speck said. “And it gives you a chance to see and hear the West Michigan Symphony in ways that you’ve never experienced us before.”

*Virtual performance passports can be purchased by calling the symphony.

Tweet
Published in Classical Music & Jazz
More in this category: « Notes of Hope Review: Mackenzie Melemed Displays the Majesty of Live Performance »
Login to post comments
back to top