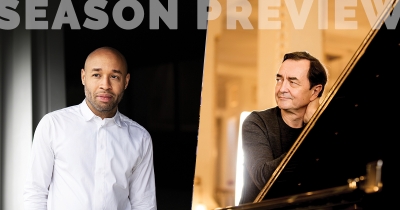 The Grand Rapids Symphony shifted its performances to livestream as well, with a season titled Pathwaves, presented by SpartanNash. Currently, the plan is for four performances streaming from the Van Andel Arena and two from St. Cecilia Music Center, spanning a diverse variety of music. Plans for 2021 will be announced at a later date.

Circle has two summer concert series going well into fall! Both are on the lawn outside the theater, so bring your own seats and pack snacks. Check out the Summer Fundraising Concerts for $25, with all proceeds going to keeping Circle alive. The next show is September 16 at 7 p.m. These feature multiple people performing classic Circle favorites. Or visit the Popup Concerts series, featuring different local musicians each night.

Farmers Alley is doing something truly different this season, with its Backyard Broadway program. Instead of going to see a play in a theater, the show comes to you! You and up to 10 of your friends can reserve a private showing of this 40-minute musical revue featuring the talented staff of Farmers Alley. They’ll bring the proper sound equipment and everything. It’s a perfect birthday gift for that theater lover you know.

The 52nd annual Fallasburg Arts Festival is going virtual this year, on Saturday, September 19 at 10 a.m. There will be an interactive map, with more than 100 talented local artists at virtual booths, and you can purchase work from them. There will be live music available free online, with a limited number of tickets sold for in-person viewings at the outdoor Camp Clear Sky venue. There will be artist and craft demonstrations, including pumpkin carving, with free pumpkins available at the LowellArts Gallery. And as always, there will be a quilt raffle, featuring a lovely quilt from a local artist. Visit the LowellArts website for more information.

At the moment, Opera Grand Rapids plans to hold its 2020 – 2021 season in person, featuring three different shows. Cosi fan tutte, October 23 and 25, is a comedy scored by Mozart. Turandot, March 19 and 20, is Puccini’s final opera, centered around princess in China and her riddles. Aida, April 30 and May 2, is a tale of patriotism, love, and betrayal set in Egypt, written by Giuseppe Verdi.

The West Michigan Symphony is going virtual this season, with the chance to return in-person next year. The lineup features a nice variety of performances ranging from jazz to classical and Celtic. Purchase individual tickets for the shows or buy a package at a reduced rate.

Home for the Holidays, December 11

A Portrait of America, February 5

Grand Rapids Civic Theatre had to cancel its planned season, but is going ahead with the exciting new Drive-In Live Theatre Series. It's radio theater, presented live in front of you. You'll pull up to the Deltaplex Arena parking lot, tune your car's radio station to the show, and sit back and relax. Here's the lineup:

Ox-Bow in Saugatuck is offering a week of Art on the Meadow workshops, September 14 – 20. These classes cover drawing, writing, welding, cooking, ice-dyeing and still-life painting. You’ll learn from masters of the craft in these multi-hour, low-enrollment, outdoor, socially distant workshops. It’s never too late to learn something new!

Writing Who We Are, Might Have Been, Could Become, September 14

An Intro to Welding and Bending Steel, September 19

The Crossroads of Spice: An Introduction to Malaysian Cuisine, September 20

Fusion Film Academy runs Children’s Creations Theater, which is safely putting together plays with children and teens. The next outdoor show will be Charlotte’s Web, September 12. If you’d like your child to take part in a show, keep an eye on the theater’s website for information on when the next auditions will take place.

If your child is interested in film production, check out Fusion’s classes, including upcoming remakes of Annie and Shrek. The students who take part learn every aspect of filmmaking they’d like to, whether it’s acting, writing, set design, operating cameras, editing, graphic design, or anything else.

Tweet
Published in Revue Arts
More in this category: « Artists All Around Breaking New Paths »
Login to post comments
back to top