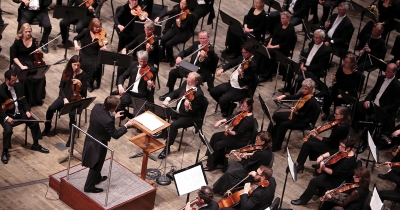 A little over a century ago, the following unattributed words appeared in Musical America magazine: “One never knows on starting forth these days whether it will be the soloist, the conductor or the entire personnel of the orchestra that will be unable to appear. The only sure thing is that someone will be ill."

COVID-19 is not the Spanish flu, yet the parallels are real — from the awful tolls of sickness and death, to the hyping of quack cures, to the wearing of masks. Today, we’re likely to compare the sight of shoppers in masks to science fiction movies; then, it was called a strange carnival.

Then, like now, musical tours were delayed or canceled; many halls shut their doors. But that’s where the parallel ends. The Spanish flu’s impact on live music was significant but not comprehensive. Today, you’re likelier to find a ghost in a concert hall than a violinist.

With Pathwaves, the Grand Rapids Symphony is changing that.

Music director Marcelo Lehninger said the decision was made early on in the pandemic to postpone the previously planned season. The planned shows were too ambitious to be realized, given the circumstances. “Mahler’s Resurrection alone: 300 people on stage.” The decision was made to cancel the entirety of the season, rather than wait to cancel show by show.

Nearly every day since the lockdown began, the symphony posted a video on social media. That allowed the organization to continue its mission of providing music to the community while keeping every single musician on payroll. When summer arrived, they performed Sidewalk Serenades — safe, outdoor events. Community members had 64 chances to hire the musicians for these performances; all 64 sold out.

Pathwaves is the latest offering: a season of six concerts, performed live in venues to include Van Andel Arena and St. Cecilia Music Center and streamed online. This required heavy investment in technology, an investment the organization had discussed making for years. The pandemic settled the question.

“When you talk about streaming,” Lehninger said, “the competition is enormous. All the major orchestras have a presence online.” They need to get it right.

Musicians are practicing at home. Within weeks of the concerts, they will begin to rehearse together, playing 6 feet apart in the arena, masks on their face. Woodwind players will get reprieves from the masks when playing but will wear them otherwise.

The pandemic has had an impact on the music chosen. The symphony will have a maximum of 20 musicians on one stage at a time. Also, the financial impact of the missed shows matters; some shows are more expensive than others. Voice and the Violin, a concert featuring superstar violinist Joshua Bell and his wife, soprano Larisa Martinez, is only possible because of a special agreement to create new arrangements premiering in Grand Rapids. “Without that kind of generosity, we would not have been able to put these programs together.”

The fact of streaming has an impact on the music chosen, too: Given that they’re opening the concerts up to more people than ever, why not make them more accessible, too?

“That’s one of our goals,” Lehninger said. “Shorter pieces, generally. Not long, complex pieces. Accessible, but with a variety of styles and composers. But also, a much more informal approach. Musicians in the arena, interesting lighting, no tails.” Yes: The musicians will not be in their traditional formalwear. Will it be like seeing a priest in jean shorts?

“I know. People tell me, ‘That’s part of the magic.’ And we’ll be back in tails soon. But this is an opportunity to break out and reach more people than ever before. One of our goals is to get more people motivated to have beautiful musical experiences.”

When Lehninger presented the proposal for Pathwaves to the board, it was received more than positively. A survey was created and sent out, not only to board members and donors, but to some people in the community. Reactions were every bit as positive.

The plan has been embraced. Will the series be? For some, a concert by the symphony is an occasion: a reason to get dressed up, eat a good dinner out, and step away from the madness of modern life to experience something transcendent.

How much transcendence comes through over the livestream — a question no one would have thought to ask a century ago — remains to be seen: an experiment in historic times.

Voice and the Violin, November 13 and 14

Tweet
Published in Revue Arts
More in this category: « ARTS: Season Preview Art on the Move »
Login to post comments
back to top