Backstage Bios: All Dressed Up 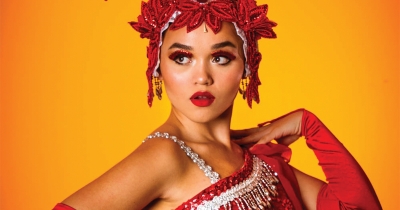 Costuming is a juggling act. You have the director’s vision and that of the writer. You have the budget, which is never quite high enough. You have, if you’re lucky, some costumes in storage that can be altered and used; others, you’ll have to make or have made. Finally, you have actors and actresses who need to not only look good, but also be able to move; that evening gown may be dazzling on the lead actress, but will she be able to kick the gun out of the villain’s hand?

At 50, Kelly Lucas has been juggling these balls for a long time.

The theatrical bug bit Lucas in high school. After graduation, he moved from Fremont to Greenville, where he took a job in printing. Looking for something more to do, he approached the Flat River Community Players group and was put to work assisting a woman with costuming. After a couple of shows, she stopped her volunteer work and he found himself the costume guy.

He did not immediately rise to an expert’s level. For one thing, he didn’t know how to sew. He learned that and taught himself how to do the job. Sometimes he was able to borrow costumes; other times, he had to make them. “The first few were horrible,” he says now.

Over time, Lucas found himself working more and more often on Grand Rapids shows. Eventually, he stopped working with the Flat River Community Players. At Civic Theatre, he worked — and still does work — alongside Costume Designer Robert Fowle, whom he views as a mentor. Circle Theatre generally uses William Dunckel for costuming, but Lucas does occasional shows there as well.

He is supported by a wide array of volunteers, often retired women looking for ways to contribute. “We have a fantastic group of ladies. They’ll be there all day sewing whatever you hand them.” Some develop niches: One male volunteer’s specialty is painting shoes. Regardless of how they contribute, volunteers are a major part of costuming for every show.

“Some of them have developed really close friendships,” Lucas said. “They get together for movies, dinners. A lot of it is individuals looking for a fun hobby. Plus, when you’re at home, you don’t usually have the opportunity to make the kind of crazy costumes theater requires.”

Budget remains the largest challenge. “The director has needs, the cast has needs and if the cast is large, you’ve got all those needs times 12. But you never want to cut corners. The last thing I’d want is to overspend in one area and wind up with chintzy costumes in another.”

Balancing fashion and movement can be challenging, too. Years ago, Lucas clothed women in long, narrow skirts for a production of The Music Man. They looked great. All was well until the choreographer assigned the women lots of kicks ...

“It’s a compromise, sometimes,” he admits. “I always want to win but, you know.”

Also posing challenges are larger casts. Frozen Jr. is a shortened version of the Broadway show; it only takes an hour to perform. Despite that, it has the same cast size as the original. Over 20 people contributed to costuming that show.

His costumes for Seussical are a point of pride. His vision was for wild, towering costumes: the kind of thing Carmen Miranda used to wear. The director initially resisted. Look, Lucas said, let me get some things together — you can make the decision. The final product, which included a red, full-sequined outfit with 3 feet of feathers, made the cut. “It was all worth it when I saw it onstage.”

When Lucas watches shows, he’s quick to notice a pant leg that’s too short. It’s a hazard of the trade. Generally, he thinks costumes shouldn’t steal the show, although they do have their place in telling the story. Blanche Dubois’ clothes wouldn’t make sense on any of the cast of Mean Girls.

“Along with the set, lighting, all that, costumes can really help create the atmosphere. They definitely contribute.”

During the COVID-19 pandemic, life in theater is mostly on hold. Lucas has enough to keep him busy, including a full-time job. And he’s been doing alteration work for friends who request it. Still, he says, it’s hard — not only for him, but for his friends in the community. “We’ve lost four, five, six shows apiece. It’s a different time. Finding little things to do. Trying to keep our spirits up.”

Asked if he has any dream shows he’d like to do costumes for, he demurs.

“Sure, it can be easy to drool over some of those budgets.” Big shows come with big opportunities, and big headaches, too.

“Each show has its own challenges and rewards and headaches and tears. But honestly, at this point it’d just be good to work on anything.”

Tweet
Published in Revue Arts
More in this category: « Art on the Move Still Dancing: Grand Rapids Ballet »
Login to post comments
back to top