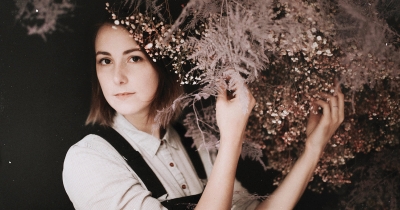 If you pull back the curtains at the Grand Rapids Ballet Company, you’ll likely find tutu specialist Brennan Smith hard at work.

“I’ve always been enamored by details,” Smith said. “Even as a little kid, my mom would say that I compliment adults on their little details, on their clothing, or their jewelry or something.”

She got her start in costuming as the wardrobe mistress at Ballet Chicago, where she worked for two years after graduating from Columbia College Chicago with a degree in photography. Later, she began to learn the intricacies of tutu design under Patricia Barker, at the Grand Rapids Ballet Company in 2014.

When asked about the complexities of tutus, Smith responded slowly.

“Well, where should I start?”

To Smith, the magic of a tutu lies in creating the perfect amount of tension between the skirt and the bodice.

“Those two pieces have to be connected perfectly in order for that garment to allow movement but also create structure for the dancer. If a costume fits poorly, it’s going to affect how a performer moves and embodies their work.”

The attention to detail required to stitch a perfect tutu is not lost on Smith. Unsurprisingly, it’s her favorite part.

“I’m really passionate about fit,” Smith said. “I don’t think I would like the costuming work as much if I was just designing. Building and stitching and having my hands on the fabric and the garments is really life-giving for me.”

A typical day as a tutu specialist isn’t always spent sewing, though. From meetings with artistic directors and choreographers to sourcing fabric, every day is different behind the scenes at the Grand Rapids Ballet.

Tutus aren’t her only specialty. As the co-founder and owner of Overgrowth Floral, Smith also designs floral arrangements for events around Grand Rapids.

“I actually started Overgrowth as a side project. My friend and I started it together after we worked for a woman in Chicago for a weekend. We did about four weddings in a weekend, and we left feeling really inspired and empowered.”

Smith recognizes the power flowers and the outdoors have on human creativity and local communities.

“Floral design has always been a therapeutic practice for me. Something in the future I want to continue doing and exploring is to bring floral therapy to other people,” she said. “I’m passionate about reconnecting with the earth and trying to figure out if urban gardening is something we can do more in Grand Rapids.

“I need my hands in the dirt. It’s something I really crave.”

Even someone as detail-oriented as Smith can still get caught up in the small things during the creative process. Whether stitching a tutu or mapping floral arrangements, she, like most artists, has moments of self-doubt.

“I think there are points in the process where you don’t believe in yourself, but then all a sudden you see the final product come to light. It’s so confirming.

“The culmination of the process is so empowering.”