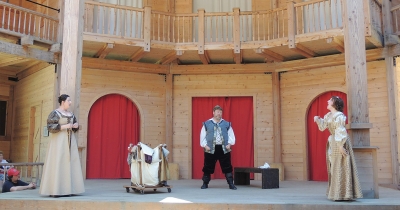 Pigeon Creek Shakespeare gets creative with its 2021 season.

Shakespeare, you might have heard, wrote King Lear, among other plays, during quarantine. It’s the kind of information perfect for the internet: grimly inspirational, a little guilt-inducing, and maybe even true. In reality, while we know that his career was interrupted by outbreaks of the bubonic plague, we don’t know with certainty when he wrote Lear.

But whatever effect the plague had on him, we know the effects of COVID-19. Planned productions of his plays were paused or scrapped; theaters closed their doors and kept them shut.

On March 12, 2020, Pigeon Creek Shakespeare Company announced that productions planned for April might not happen. They didn’t. On May 23, Executive Director Katherine Mayberry wrote a blog post about the realities facing the theater. “Live performance is the heart of our mission and artistic vision,” she wrote, “and we are bursting to get back to the stage.”

It hasn’t happened yet. But the recent announcement of Pigeon Creek’s 2021 season brings with it the cautious hope that, by late summer, the company will return to the stage.

The season will begin virtually, with a production of Thomas Middleton’s Women Beware Women. Middleton, a contemporary of Shakespeare’s, wrote it as a tragic story of intrigue, female competitiveness, jealousy, and death. In line with Pigeon Creek’s openness to cross-gender roles, it will feature an all-male cast.

“The early plays were always cast with all males,” Mayberry said. “Gender-fluid casting is built into it all.”

Another Middleton play, The Witch, will be released virtually in late October. It’s a tale of murderous women, incest and magically imposed impotence; in other words, the perfect material for the Halloween season.

Two contemporary plays, both commissioned for the company, will also be produced virtually: Mike Nichols’ The Gospel of Friar Tuck, which presents a new take on the characters we know from the Robin Hood stories; and an as-yet-untitled installment in David Taylor Little’s series Diagnosis, Shakespeare!

If the pandemic improves as expected, Pigeon Creek will return to live, in-person theater by late summer, with a performance of Measure For Measure at The Rose. The venue, located on the grounds of The Blue Lake Fine Arts Camp in Twin Lake, is a reproduction of an Elizabethan theater. Pictures reveal it to be a perfect spot for a return: a beautiful space whose beauty would enhance, not detract from, those on its stage.

Mayberry hopes to follow that performance with a tour of area venues, as Pigeon Creek has done in the past. It may yet happen.

Regardless, 2021 will differ from past seasons. That has its benefits. Mayberry sees it as an opportunity to produce other shows, some of them new, and some written by people neither male, nor white, nor dead.

Additionally, the virtual productions will require the actors to do more in less space.

“That’s cool! They’re forced to be creative: What can you do with this small screen? It’s the sort of thing we’re interested in anyway. Our full productions don’t use contemporary stage tech, so we’re used to asking actors to work within limitations.”

Virtual programming has increased Pigeon Creek’s geographical reach, allowing people outside of the area to experience its work. It’s also allowed Mayberry to collaborate with other theaters throughout the country. “Why haven’t we done some of this stuff all along?”

After announcing the season, Mayberry was pleased by the community’s response.

“People are happy that we’re planning things. They want to know they’ll have something to see. And actors are chomping at the bit.”

In the end, the pandemic may have changed Pigeon Creek Shakespeare Company for the better. “We want to continue to do some of this virtual programming in some form. We want to reach the audience in different ways.” This is wise. Still, as she wrote, the heart of the company is live, in-person theater. May it be soon that we sit among strangers.

Tweet
Published in Revue Arts
More in this category: « Hempy at Home Don't Call It A Comeback »
Login to post comments
back to top