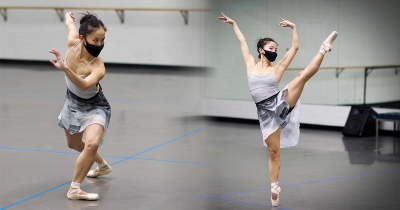 A woman dwells in a forest. She is a huntress, perhaps a goddess. And she is frustrated, even tormented, by chastity. Remember that a horse, in heat and unsatisfied, can kick a hole in a barn door — what could Diana do?

That fraught situation is the basis of Aubade, a concerto and ballet written by Francis Poulenc, a 20th century composer. It serves as the latest collaboration between Grand Rapids Symphony and Grand Rapids Ballet, constituting the bulk of an evening of music titled The Art of Dance (still available for streaming).

The Art of Dance

Marcelo Lehninger, the symphony’s music director, had conducted Aubade as a concert (music-only) years before and had fallen in love with it. “Poulenc isn’t played enough today, unfortunately. This is a really, really cool piece of music. I always thought that I’d love to do it as a ballet.”

When James Sofranko joined the ballet as artistic director, Lehninger saw his opportunity. “James and I started talked about ideas and projects, and this was one that came up.”

Sofranko found the music to be very powerful. “It’s very expressive. It has a modern feel, almost like Stravinsky. It’s big and bold; you’ve entered this realm, and you’re just caught up in it.”

Following the modern quality of the music, he took a somewhat stylized direction when choreographing the dance, resulting in a minimal, formal pas de deux between the goddess and the man who finds her, who will be bent to her will.

Yuka Oba-Muschiana plays the goddess, and is pleased to be doing so. “She’s a hunter, so strong and fierce. I feel like I’m playing a forest queen.”

This is not the first time the symphony and ballet have collaborated, and it won’t be the last. As Sofranko points out, ballet is meant to be accompanied by music. And Sofranko sees strong parallels between dancers and musicians. “Like us, the symphony is made up of people who have devoted years, sometimes decades, to their artform — their craft.”

“Cultural organizations should always find ways to collaborate,” Lehninger said. “I always have that in mind. The symphony used to collaborate with the ballet even more often in the past, but those collaborations became fewer over time, to the point where we were only performing during The Nutcracker. We want to get back to where we were before.”

Rounding out The Art of Dance will be two additional pieces. The first, also titled "Aubade," is by Brazilian composer Antonio Francisco Braga. It’s a strings-only piece, and is short, coming in under seven minutes. “I discovered it by accident,” Lehninger said. “A friend sent me a link to a performance. It’s a romantic piece, like a little dessert.”

Finally, the evening will close with Tchaikovsky’s Serenade for Strings in C Major, Op. 48. It’s a popular, well-known composition, often performed by small chamber orchestras and filled with beautiful melodies. Although the ballet won’t be performing to this piece, Tchaikovsky was a master of composing for ballets, which provides a thematic link to the Poulenc piece.

The third, slow movement is almost a prayer. “I consider that a hymn,” said Lehninger, “which is appropriate given the times we’re in.”

“How honest do you want me to be?” Bob Bernhardt said, laughing.

We’re talking about Lights, Camera, Music!, the upcoming Grand Rapids Symphony performance, available to stream April 23 through May 22. It’s a series of pieces either composed for TV or movies, or prominently featured in them. Composers from Pachelbel to John Williams are represented.

I’ve asked how the pieces will fit into an overall whole.

“The hard part was really finding music from movies or TV that feel cinematic and can work with a relatively small ensemble.” (The ensemble size needs to be small given COVID-19). “The most famous movie music we know, in most cases they had an orchestra of 100. Even in normal times, we have between 50-75 people on stage.”

The other determining factor was accessibility. “This music was chosen to be a direct line; there’s no hidden path here. All of it is interesting, or beautiful, or well-known, or all of the above. It’s a pops concert: an hour-plus of pure delight. That’s what we’re aiming for.”

Some will be pieces audiences don’t realize they know. “The tango, Jalousie: you recognize it, even if you don’t know the title. It’s been used in countless movies over the years. Famous tango written by a Dane — I’m surprised, too!”

The centerpiece will be “Escapades,” from John Williams’ Catch Me If You Can score. “Someday I want to do an off-the-beaten-track John Williams concert. Pieces that we don’t hear often, but glorious ones. This is a brilliant 13 minutes of music and calls for a virtuoso saxophone player.”

That virtuoso will be Timothy McAllister. He had been slated to perform in the fall of 2020, but that performance had been canceled due to the pandemic. He will play three pieces, the star being “Escapades.”

“‘Escapades’ is this beautiful, accessible piece,” McAllister said. “When that movie came out, I had no idea saxophone was featured so much. It’s this ’60s West Coast jazz sound.”

McAllister’s last public performance was a year ago, in St. Louis. It was the final live performance held in the hall before the stage went dark for months. Lights, Camera, Music! will be the first time McAllister plays a streamed show.

He sees the process as more intimidating than playing for a live audience, even a large one. “There’s a lot of pressure because it’s being documented. But I’m excited for the challenge. What a great orchestra to do it with.”

Also performing will be the Grand Rapids Symphony Chorus, although their contributions will be provided by video, not live the evening of recording.

“It’s an interesting evening,” Bernhardt said. “We’ve got a jig, we’ve got profound pieces.” One of the latter is Ungar’s “Ashokan Farewell,” used prominently in Ken Burns’ Civil War documentary — so prominently, in fact, that of the 11 hours of the documentary, a full hour is scored to that piece.

Bernhard points out that the piece was written in the early 1980s but feels “as though it’s always been here. It’s a tune everyone will know and love. It’s emotional and nostalgic.”

Another profound piece is John Williams’ “Angela’s Prayer,” written for Angela’s Ashes. “It’s one that’s not often performed. It’s kind of like Beethoven’s 8th symphony, which suffers because it’s between the 7th and the 9th. But it’s beautiful.”

Having access to beautiful music during difficult times is a good thing, even an important one, and our arts organizations are to be congratulated on the pivots they’ve executed. “Grand Rapids has salvaged its seasons in a really stunning way,” McAllister said.

But, as Bernhard pointed out, “All of us are just waiting for the day when we can have audiences again. I’m 96 now — that’s a joke, but now that I’m older, that connection with an audience has become even more vital and important to me.

“That day when we have our first in-audience concert again ... I suspect I’ll probably weep. It will be profound.”

Tweet
Published in Revue Arts
More in this category: « Don't Call It A Comeback
Login to post comments
back to top