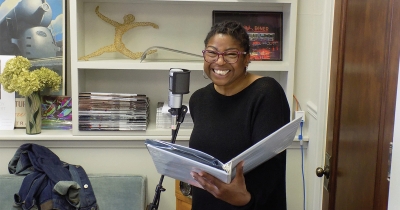 "It was an extremely emotional evening. We all had moments of tears, whether from joy or sadness.” Kyle Los, managing director of Actors’ Theatre, was describing the first rehearsal of Home, a show that represented a return to the stage.

Home is the first of Actors’ Summer Series, a collection of four shows focusing on themes important to the community — and the theater’s first performances in over a year. Queer Stories will follow in June, while July and August’s shows have yet to be defined.

Marcus Jordan is directing Home, but he wears the title lightly. “I’m not really interested in titles. We use them so people don’t get confused, but we’re really trying to abolish rigid structures. I call everybody ‘the fam.’ We’re a family of people trying to make something beautiful.”

Developing the show has been a collaborative process. Performers were asked to explore what home meant to them. Their varied answers reflect the complexity of the term: a place of safety, for some; a place of instability or even fear, for others. One woman shared that it’s where she feels most anxious, uncertain as to whether she is succeeding as a mother.

“Home isn’t the physical structure,” Jordan said. During the pandemic, that has become clear, especially to those working from their residences. “It’s people, experiences, community.”

Having defined what home meant, the team found songs that expressed those meanings, some drawn from previous Actors’ productions. But while a series of songs does make a concert, it doesn’t make a show; the team was determined that Home would be musical theater. “It’s absolutely narrative,” Los said.

Ellie Frances, Creative Director, points out that the show “has a beginning, a middle, and an end.” She points out, too, that it fits squarely within Actors’ remit of providing challenging, thought-provoking theater. That said, being held outdoors, it will not be geared exclusively toward adult audiences, unlike some of Actors’ past shows. “Nobody wants to casually sip lemonade outside and have her heart ripped out,” she said.

All shows will be held outside of the John S. Hyatt and Associates building on Alpine Avenue. To Jordan, this is natural. “We’re from Michigan. We’re people who camp, hike, love to be outside, with the earth. As theater people, we’ve been conditioned to be inside, but Michiganders are used to the natural element.”

The decision to hold the series outdoors was driven by pandemic-related restrictions (as of this writing, when restrictions for the fully vaccinated have begun to ease, Actors’ has announced no changes). It also provides an opportunity to reach more people. “We can’t just be downtown,” Los said.

Another opportunity to broaden the audience is the “Pay What You Can” feature. Tickets are nominally $15, but purchasers can pay more or less, depending on their circumstances. A lack of discretionary income will not be a barrier to residents hoping to attend any show in the series.

The response from the Actors’ community has been more than positive. “The first e-mail I got just said, ‘Hot damn,’” Los said. “People are thrilled to hear we’re back.”

Beyond the summer series, what the future holds for Actors’ remains unclear. “We would love to do more traditional shows in the fall. It comes down to fiscal responsibility.” Loosening of restrictions could present an opportunity to return to indoor performances, including the long promised, anxiously awaited national premiere of Erin Shields’ Paradise Lost.

Los sees opportunities not just to return to what has been done well in the past, but to expand its scope. Expansion could include providing space for small workshops, allowing for actors to work on their craft, or new playwrights to workshop a script.

But expansion could also include bringing more people into the fold. “Historically, we’ve been a white organization,” Los said. “We haven’t always been fully inclusive. It hasn’t been accessible for everyone.”

And it should be. There are precious few spaces in which everyone can feel at home.

Tweet
Published in Revue Arts
More in this category: « Arts Calendar: May 2021 Summer on the Stage »
Login to post comments
back to top