Summer on the Stage 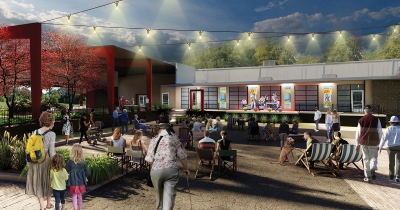 Saugatuck Center for the Arts and its theater organization, Mason Street Warehouse, have a lineup of theatrical performances and concerts ready to take center stage this summer thanks to their updated outdoor facility. After a long winter, SC4A will return with open arms to the West Michigan community — six feet apart, of course.

“When we started to plan this season, it was like wearing a giant blindfold while walking through a forest. You don’t know if you’re going to run into a tree or walk into a stream,” said Kurt Stamm, Mason Street Warehouse’s artistic director. “It’s a constant navigation. You just never know which direction you’re going to end up going.”

A year before the pandemic hit, Saugatuck Center for the Arts built an outdoor stage. The space has undoubtedly had a lot more use than first expected, but Stamm feels lucky for the opportunity to have a way to host shows during this time.

“It’s been enlightening, but it’s also been exhausting. In some ways, it’s made us really appreciate and be aware of the things we have that are great, but also how we can take the things that are great, modify them, and still maintain that quality.”

This summer, SC4A and Mason Street Warehouse are hosting another series of outdoor concerts, as well as three theatrical performances, including Shout! The Mod Musical, Dixie’s Tupperware Party, and Just Too Big.

“Shows, I think especially this year, need to be fun, somewhat lighthearted, but also not super fluffy. All these shows still have a good message and some poignancy, but at the same time there’s also a lot of laughs and escapism to be had,” Stamm said.

When it comes to live music, SC4A’s outdoor concerts will span from indie rock to showtunes.

“We did do a few concerts last year, and they were a big success. We ended up extending one of them for an extra night because it sold so well. It was a test to see if people would be willing to bring their own chairs, sit in our parking lot, and watch a show we created from scratch.”

BYOC — bring your own chair — is one of the many innovative ways SC4A and Mason Street Theater are encouraging social distancing at their performances. This allows audience members to form “patron units,” which describes a family or group who agree to sit together, to remain in their pods throughout the show.

Through patron units and other safety measures, Stamm is hoping the public’s eager participation will carry over into the 2021 season, especially in light of recent improvements to Saugatuck Center for the Arts’ parking lot, now known as the Performance Plaza. “So much about theater is the environment. We really spent a lot of time making the outside of the building much more inviting, much more user-friendly.”

While the outdoor performance plaza is slightly smaller than the center’s main stage, each show holds all the magic of a full-size performance, with an updated sound system, professional stage lights, new set designs, bold costumes and more.

After cancelling shows in 2020, SC4A and Mason Street Theater stayed afloat thanks to the West Michigan community. The center’s sponsors stood by their commitment to the arts, even while the stages were dark, allowing them to proceed with the updates planned for the performance plaza.

“Every one of our sponsors said to keep the money this year, or keep it and roll it over to next year. No one said, ‘We need to have our money back,’ and this is a testament to the community that supports the arts in this area,” Stamm said.

“They want this place to continue.”

Stamm, Saugatuck Center for the Arts and Mason Street Theater are grateful to have had West Michigan patrons and participants rally around them through the winter while they innovated fresh ways to share the arts. As the summer months come and burst with live performances, SC4A is thrilled to have a way to provide patrons a safe way to sit back and enjoy the show once more.

“We’ve been very fortunate to have the support of the community,” Stamm said. “We stuck it out, and we’re still here.”