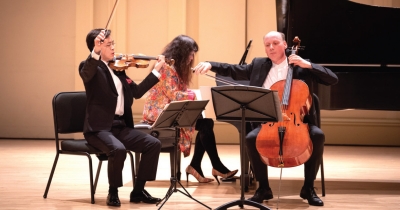 It would be incorrect to say that St. Cecilia Music Center returns to live music this month; during the pandemic, they staged many virtual shows. Those shows were watched by 30,000 people, more than could ever fit in the hall itself. Still, the November lineup of three live, in-person shows reflects something of a return to normalcy.

“We’re so excited to get back to live concerts,” Cathy Holbrook told me. Executive director of St. Cecilia, she recognizes that the pandemic is not over. The decision has been made to require proof of vaccination or a negative COVID-19 test within 48 hours of the show, as well as wearing masks.

That decision, made for health and safety reasons, was not intended as a political statement, although some have taken it that way. About a third of the responses have been negative.

But the approach allows for a return to live music, in a remarkable venue. Pianist Wu Han said, “It’s one of the most beautiful, glorious venues, like a little Carnegie Hall. The acoustics are spectacular. It’s this hidden American jewel.”

On November 12th, Rodney Crowell performs. Crowell is a folk musician with a devoted following. A two-time Grammy award winner, Crowell is known both for his own songs and the songs he’s written for others, including Keith Urban and Alan Jackson. He can also boast of having recorded with Johnny Cash, his former father-in-law.

“I’m really proud of this program,” Wu Han told me. “I wanted to explore connection and community.” Aside from the musical connections, the composers were important to each other’s lives; Brahms discovered Dvorak and helped establish his career. Suk studied under Dvorak, and in time married his daughter.

The more you learn about the composers, the more interesting it gets. Dvorak wrote his 100th opus, Sonatina for Violin and Piano in G Major, while at a waterfall. So inspired was he that, lacking paper, he wrote the melody onto his shirtsleeves. “I wish we had that shirt,” Wu Han said.

2021 marks the 10th anniversary of the Chamber Music Society of Lincoln Center’s partnership with St. Cecilia Music Hall, a partnership begun when Finckel first saw the hall, and cemented when Holbrook took him and Wu Han out for drinks and wings at the Cottage Bar.

“Most musicians come for a night, have a great time, and leave,” Holbrook said. “But this is something different.”

Finally, Leo Kottke will play on November 19th. Kottke is a folk artist with a near-cult following, the kind of audience that will show up to as many shows as they can. This will be his fourth appearance at the venue; all previous shows have sold out.

“I’m thrilled to have him come back. His concerts are just really amazing music and really fabulous storytelling,” Holbrook said. “You’re just as entertained by the stories as by the music. And this is a guy who’s a legendary guitar player. Rolling Stone said he’s so good he never needed a band.”

Does Holbrook expect to fill the hall? “I don’t know,” Holbrook said. “People will be cautious. Honestly, at the beginning this felt like the end of days. But our board stood by us, our donors stood by us, our staff stood by us. Our audience stood by us. It might take a year or two to build back to where we were before. But that doesn’t matter. We’re going to have these shows.”