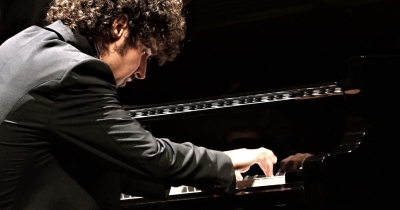 The 2020 Gilmore Festival was thwarted, like so many live performances, by the pandemic; however, the Rising Stars Series has returned, offering eager piano enthusiasts an opportunity to experience playing from the world’s best and brightest keyboard stylists either live, in-person, or live streamed from Kalamazoo.

Sunday’s dreary afternoon was warmed and brightened considerably by the phenomenal program offered by Federico Colli, the celebrated winner of the 2011 Salzburg Mozart Competition as well as the Gold Medal at The Leeds International Piano Competition in 2012, who brought a sensational feeling of hope and complexity of emotion through his artistry.

Born in Italy in 1988, Colli brings a soulfulness as well as both an Italian and Russian sensibility to his playing, focusing largely on translating the emotionality and storytelling aspects of the music through a full-bodied approach.

The Kalamazoo audience experienced this for themselves on Sunday during the elegant and dramatic 70-minute program of Scarlatti and Mozart sonatas, the very rarely performed live Schubert’s Fantasie in F minor, and Bach’s Chaconne from Partita No. 2 in D Minor. Together, these compositions as interpreted with great imagination by Colli provided deep and varied emotions, at turns bright, lively, and playful, as well as terrifically moody and wildly dramatic, often punctuated with bold physical flourishes.

Perhaps most notably, Schubert’s Fantasie in D Minor, began quite pleasantly and dynamically but swelled in darkness, boldness, speed and dynamism. Colli’s lips and head moved frenetically as he translated the piece and built to a tremendous dramatic pause before a magnificent shift in tone. He played to the point of breathlessness.

Composed in 1828 for four hands, it is performed live extremely rarely, perhaps in part because the printed score isn’t widely available; in fact, Colli discovered it in a remote countryside Russian library to become one of the first pianists to bring it to a live audience. Sunday’s performance may have been the first in the United States, and only his second time ever playing it live. And what a performance it was.

Wearing a dark three-piece suit with a neck scarf rather than a tie, Colli set his bench higher than most, allowing for greater distance and movement between him and the keys. His curls bounced as if choreographed during high-valence moments, just as his long fingers and hands raced up and down and leaped off the keyboard—and during the Bach, he looked up the from black grand Steinway in particularly poignant moments, as if toward the heavens.

This level of artistry indeed feels as if it’s transmitting the divine. And Federico Colli is utterly in command as he channels that source of magnificence. What a gift it is that those in attendance on Sunday got to bear witness to such mastery.