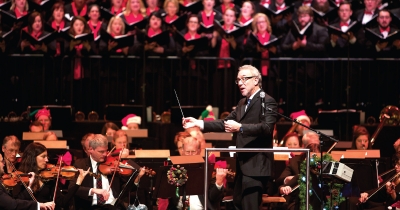 Holiday Pops features a special guest (“Not Santa,” conductor Bob Bernhardt said, “although he shows up, too”): Tony DeSare, an accomplished pianist and singer/songwriter. DeSare has a smooth, clear voice, and a style that traces its origins to musical ancestors like Frank Sinatra.

DeSare will perform six songs with the symphony, most drawn from the American songbook, including “The Most Wonderful Time of the Year” and “I’ll Be Home For Christmas.” Additionally, he will play “Jingle Bells” in 20 styles — everything from Neil Diamond (who sounds the way it feels to sit before a crackling fire) to Radiohead (who sound like watching in quiet despair as a fire consumes your house).

The section will balance holiday excitement with beauty and even melancholy, while making room for humor, too. “He’s incredibly versatile,” Bernhardt said. “He’s really delightfully good.”

Additionally, both the Grand Rapids Symphony Chorus and Youth Chorus will perform. The adult chorus will perform two excerpts of Messiah, including the famed “Hallelujah” chorus, as well as three arrangements by Dan Forrest.

The Youth Chorus will join the Symphony Chorus to perform “Betelehemu,” a Yoruba Christmas carol written by Babatunde Olatunji for Morehouse College. It’s a beautiful song, anchored by percussion but soaring, too. “It’s celebratory both of the season and of culture,” Bernhardt said.

The Youth Chorus will also perform an arrangement of “In The Bleak Midwinter” by David Lockington, former Music Director of the symphony.

The evening, which is designed to be welcoming to families, features a “Sleigh Ride” portion, during which a young person will be chosen from the audience and asked to come onstage. There, he or she will take the baton and conduct the piece. “It’s very charming, sometimes adorable and sometimes extraordinary,” Bernhardt said. “If they’ve got that inner pulse… well, then my job is in jeopardy.”

Assuming no child maneuvers him into joblessness, Bernhardt will return to conduct Cirque de Noël.

“The basic idea,” he said, “is to combine great holiday and classical music, famous pieces, those most oriented toward either winter or the holidays — to combine that with a visual celebration of athleticism and artistic beauty.”

The event will be a partnership between our symphony and Cirque de la Symphonie, an organization of incredible athletes who perform feats unlikely enough that, if you saw them onscreen, you’d chalk them up to CGI. Think of someone performing tricks in the air, held up only by fabric; think of a large, upside-down man, all of his weight bearing down on one palm, a palm he has pressed against the top of another man’s head. Think of juggling so fast and accurate that it should be recognized at the Olympics (as, indeed, several members of the organization have; Cirque de la Symphonie employs many Olympians).

The draw, then, is the spectacle; still, it wouldn’t be the same without music. The symphony’s role becomes that of a supportive partner, providing the background of sound against which the athletes will perform. Music will tend the familiar and well-loved, such as pieces by Schubert and Tchaikovsky, made new again by context.

“It’s a challenge, but a lovely challenge,” Bernhardt said. “I feel like it’s my responsibility to give the athletes the greatest chance to succeed.”

As with the Holiday Pops piece, Cirque de Noël should prove welcoming even to those who might normally not attend a symphony performance. It will be informal, relaxed; in that, it might owe more to how classical music concerts were originally attended than how they are today.

Tweet
Published in Classical Music & Jazz
More in this category: « Review: Gilmore’s Rising Star Series Is a Gift
Login to post comments
back to top