Welcoming the World to the Gardens 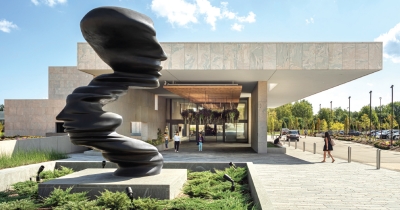 Among West Michigan’s most gleaming jewels is Frederik Meijer Gardens & Sculpture Park, but you know that — word has gotten out. Years ago, its planners dreamed of someday drawing 200,000 visitors a year. In 2015, it drew over 780,000.

Welcoming more than three quarters of a million visitors annually presents challenges, from parking to facilities. In 2017, Welcoming The World: Honoring A Legacy of Love, a $115 million expansion project, launched.

“We did it in phases,” Meijer Gardens President and CEO David Hooker told me. “We tried to minimize disruption of our daily operations. There’ve been changes to our amphitheater and parking lots.”

Having grown incrementally, Meijer Gardens was able to add additional parking over time. “We were able to take a comprehensive look at the design,” Hooker said. They were deliberate in placing gardens among the parking areas. “You’re never more than a few rows from a beautiful garden.” The design was not just deliberate in terms of aesthetics, but in environmental impact, as well; rain in the lot drains into a sewer, then to a rain garden, and, after filtering, is used for irrigation.

Architects Tod Williams and Billie Tsien, whose works include the Barack Obama Presidential Center in Chicago, were brought in to help expand the properties. Among their contributions was the creation of the Garden Pavilion Room. “It brings light in from seven different chambers or portals: three from above and four that surround you,” Hooker said. “It’s amazing architecture, and we knew we needed an artist who could respond to it.”

They searched the world. In the end, Spanish artist Jaume Plensa was chosen. “I had seen a piece of his in a sculpture park in Italy,” Hooker said. “I visited an installation he had done in this centuries-old basilica. It was just amazing, beautiful. Everything worked just perfectly.”

The team flew to Barcelona and showed Plensa the plans. He created Utopia.

Four faces (one for each wall), carved in marble, stand 19-feet high. Each face is beautiful; each, too, represents a woman of a different ethnic background. They have a mysterious quality, as of living women caught in moments of deep contemplation, whose thoughts we can only guess at. In a video on Richard Gray Gallery’s website, Plensa said he wanted to capture the container that houses our souls.

Four hundred tons of marble were quarried, all of it in Vietnam, and then shipped to Plensa’s studio in Barcelona. CNC machines were used to carve the pieces; Plensa and his assistants did the sanding necessary to achieve the final result. Around 300 blocks of marble were carefully packaged, placed in shipping containers, and shipped to Grand Rapids.

“Seeing them installed was a joy to watch,” Hooker said. “To see these skilled artisans was just fantastic. They never damaged a piece.”

Earlier, throughout the fundraising process, Hooker would describe the room and its four faces to people in great detail. Once the piece was installed, he said, he would then bring those same people into the room. “The reaction was almost unanimous: ‘Oh, David, I had no idea.’ I realized my powers of description might be lacking.”

Work on Welcoming The World continues, but by June of 2022, all aspects are slated to be completed. The welcome center, and Plensa’s remarkable contribution, are only a part, but they are a significant part.

At the end of our conversation, I mentioned to Hooker that I’d be taking my young daughters to the gardens soon. I’ll share a secret he shared with me: If you go to the information desk, there are two pieces of marble there, which anyone can touch — a small way of bringing Utopia into your own hands.