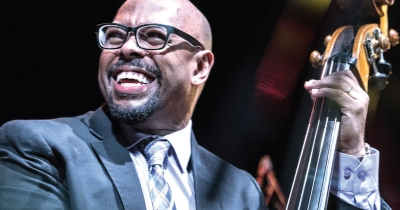 Christian McBride, bassist, arranger, and composer, prides himself on making jazz you can feel. “There’s this unspoken thing in the jazz world,” he told Revue. “The more intellectual you are, the smarter you are … that’s the goal for some people. ‘Look how much this artist challenges listeners!’ Me, I never thought music should be a Soduku puzzle. You should feel like you had a meal. I want you to walk out saying, ‘Man, what did they put in there to make it taste so good?’”

Music lovers will soon have the opportunity to taste his cooking. Over the course of three evenings (February 24th-26th), St. Cecilia will host its first ever Winterfest jazz festival. McBride curated the event, and his playing will anchor it, but each night will feature different collaborators; in the end, a wide range of jazz as well as other music will be presented.

On February 24th, he will share the stage with Edgar Meyer; both will play double bass. Meyer, as with McBride, is a well-decorated veteran player; his collaborators have included Bela Fleck and Yo-Yo Ma. Although McBride has played with him many times, he still sees it as a challenge. “It’s always a challenge to play with the greatest bass master in the world,” he said.

Musically, the evening will draw not just from jazz but from bluegrass, blues, and classical music. Both players have individual strengths, but, McBride said, “We’d be remiss not to challenge ourselves as well.”

The respect that McBride has for Meyer is clear. “Every time I take a bow out, I feel like a mosquito.” But each holds his own in dual performances, one playing melody, the other rhythm, and complementing each other.

French singer Cyrille Aimée will join McBride on February 25th. McBride first heard the curly-haired, joyful singer on a live album she made with musician and composer Roy Hargrove. Knowing Hargrove wouldn’t work with her unless she had chops, he was immediately impressed. McBride would later work with her, seeing firsthand her fearlessness and her range.

“She’s willing and able to sing all kinds of music.” Sometimes she does so in a single song, as the video for “La Vie En Rose” (recorded with the Emmet Rose Trio) demonstrates. It begins a cappella before a swinging piano, bass and drums join in. Aimée dances while the instruments carry the tune, coming in after a while to scat; in the end, the song returns to itself, having expanded terrifically.

McBride was working on a cruise (remember cruises?) when the news of Winterfest came up. Aimée was an obvious choice. She accepted. This will be her first performance in Grand Rapids in five years.

On February 26th, Inside Straight will play. This is McBride’s main band, and has been a working unit for 13 years. “The shoes are broken in,” McBride said. “You’ll see a very well-rehearsed group.” The band has released two studio albums: People Music and the cheekily-titled Kind of Brown. A live album, Live At The Vanguard, followed last year.

The festival serves as recognition for McBride’s many accomplishments over the course of a career likely to last a long time. McBride is young now – 49 years old – and started early, having made his name as a teen prodigy. He was seventeen when he had the opportunity of working with Freddie Hubbard at the Budweiser Jazz Explosion.

“It was the jazz equivalent of James Brown,” he said on The Moth. Never mind that the gig was at a venue called The Plantation. Hubbard was a tough, swaggering man, and not quick with compliments; after the gig, he said nothing more than “nice meeting you” and disappeared into his limousine.

Months later, McBride received a call stating Hubbard needed a bass player for a gig in Chicago. McBride flew out. Over the course of the gig, Hubbard acknowledged every other player but McBride, nodding as they played, patting them on the back. When it was McBride’s turn, he left the stage.

McBride was dejected, but he told himself that he at least got to play with the man. At the end of the concert, though, Hubbard told the crowd, “This bass player here … he’s playing his ass off tonight. How about it for my new bass player?”

That was over three decades ago. In the interval since, he’s gone from a talented youth to an acknowledged master. And over the course of three nights, he and his hand-picked collaborators will serve up delicious music – the kind that leaves you not just impressed but full and satisfied as you walk while humming to your car.