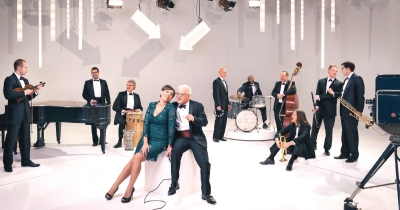 Held biennially, the 2022 Gilmore International Piano Festival spans several weeks in April through mid-May and showcases the diversity of the piano, as well as the talent of renowned pianists from across the globe.

If you’ve been following since its inception in 1989, you likely recognize the fest by its former name: Gilmore International Keyboard Festival. The name change is really only semantic, to quell confusion and reflect that the majority of the performances feature pianists. But, the Festival still encompasses works of the harpsichord, organ, synthesizer, and more. Incidentally, the illustration art for the 2022 Gilmore Piano Festival was created by Grand Rapids artist Kristin Zuller, whom we profiled in the August 2021 issue of Revue. We love a good connection!

The Gilmore International Piano Festival was founded in appreciation of Irving S. Gilmore, a Kalamazoo-area arts patron, philanthropist, and pianist whose contributions and legacy live on in the community. Today, it continues to recognize some of the most accomplished and captivating pianists in the world. In addition to the $300,000 Gilmore Artist Award, which is granted every four years and recognizes extraordinary classical piano artistry, the organization has recently announced a large-scale award for jazz pianists.

This new award—also totaling $300,000—was established thanks to an $8M gift to The Gilmore made possible by retired brew master Larry Bell, of Bell’s Brewery fame. The first Larry J. Bell Jazz Artist Award is planned to be announced in 2026. More than the founder of the nationally known Kalamazoo Michigan brewery, Bell is also President of the Gilmore International Piano Festival Board of Trustees. In his honor, there is also a newly instituted Larry J. Bell Young Jazz Artist Award, which, similar to the Gilmore Young Artist Award, will be bestowed every two years to a promising pianist age 22 and younger.

In the same way that these awards alternate between classical and jazz piano, so does the Festival, with the upcoming 2022 event being a celebration of jazz artists. With performances held in person at venues of all sizes across Kalamazoo, Battle Creek, and around West Michigan, it kicks off at Chenery Auditorium with a pre-festival solo recital on April 8 by Yuja Wang—Gilmore’s 2006 Young Artist awardee.

The Festival then officially begins with none other than legendary jazz composer and pianist Herbie Hancock. Held on April 24, 2022, at Miller Auditorium, the concert marks the return of Hancock to West Michigan after he took his audience to outer space with his 2018 performance at the Meijer Gardens Summer Concert Series. Opening week also features a rip-roaring dinner and a cabaret show with New York-based jazz vocalist Svetlana, accompanied by pianist Willerm Delisfort. It’s hosted by the Radisson Plaza Hotel on April 29, 2022 and guests are encouraged to participate in the fun by getting decked out in their best 1920s attire.

Classical headliners, in addition to Yuja Wang, include Sergie Babayan, Daniil Trifonov, Beatrice Rana, and 2018 Gilmore Artist Igor Levit. There will also be a performance by the chamber music duo Sheku and Isata Kanneh-Mason.

There are 100-plus piano-related events as part of the Festival, ranging from solo and duo piano performances to ensembles to orchestra concertos, as well as chamber music, a piano-accompanied brass band, and avant-garde offerings. Other special features include the Jazz at Noon and Jazz at Bells series, plus films, family concerts, and even a an appearance by the genre-crossing band Pink Martini. The Festival closes on May 15 with a collaboration between Kalamazoo Symphony Orchestra, 2018 Gilmore Young Artist Wei Luo, and 2020 Gilmore Young Artists Misha Galant and Maxim Lando.

Visit thegilmore.org to learn about attendance requirements, see the full list of events, and purchase tickets.