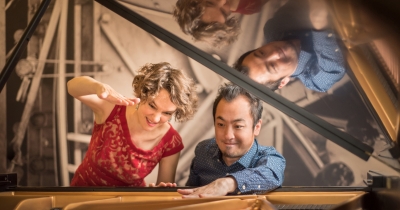 For those of us who love music, we often forget what terrific athleticism it takes to create, especially when we’re most often exposed aurally to recorded sound. But to bear witness to live performance is a different experience altogether, one that puts us in the presence of the bodies as they’re creating those sounds that move us.

And in the case of ZOFORBIT: A Voyage Through Space Piano Duet and Dance, a collaboration between pianists Eva-Maria Zimmermann and Keisuke Nakagoshi, known as ZOFO, and Wellspring/Cori Terry & Dancers, as part of the Gilmore Piano Festival Sunday night, the music was made physical and the physical made musical, resulting in a transcendent experience and the highest of arts.

In this one-hour performance of 14 pieces of astronomy-related music by four composers, the four hands of Zimmermann and Nakagoshi danced on the keyboard of a single Steinway & Sons grand piano in a spotlight center stage, leaping over one another and, at times, reaching into the strings and structure of the instrument to make sounds beyond what one might expect from a piano.

And for half of the pieces, the pianists’ chosen compositions came alive through the bodies of six dancers, creating a beautiful marriage between music and movement, with one live performance enhancing and elevating the other, a potent alchemy that created something new that can only exist in the moment of its singular performance.

ZOFO chose to interweave movements from Estonian composer Urmas Sisak’s Spiral Symphony, as if representing a spaceship traveling through the galaxy, with selections from Gustav Holst’s The Planets, including Mars, Mercury, Jupiter, Uranus, and Venus, each of which embodies the astrological spirit through music of each, from a dark, serious march to playful, melodic, and festive to a little melodramatic reminiscent of vaudeville to a gentle ballad, lilting and lyrical, with plenty of space between notes.

Nakagoshi and Zimmermann’s playing is athletic and as delightful to watch as it is to hear, and they even use the piano in unusual if not new ways, particularly in George Crumb’s Beta Cygni and Alpha Centauri, from Celestial Mechanics, knocking, plucking, dampening the strings and wood to create unexpected sounds and shapes with the notes—much as the project of modern dance is to make new again the lexicon of classical ballet in unusual ways. Even though the dancers do not join the pianists for these pieces, the implied conversation continues.

Cori Terry set her usual fare of Hawkins’-style movements — bold wide second positions complemented by outstretched arms, leaps, twirls, weight sharing, inversions, gliding, crawling and rolling on the floor — shot through with dynamic tension, and though these new works feel familiar, they’re made new and bold through the extraordinary musicality of the dancers performed not just to live music, but on stage with ZOFO, every bit creators of the physical musical experience.

Though there is no discernible narrative here, the movement of the dancers creates the movement of Sisask’s Spiral Symphony deliberately, as if guiding the audience through Holst’s The Planets. It’s a wonderful conceit, fully felt if not consciously understood by the audience.

And one of the most moving sections of the performance was David Lang’s gravity, a dreamy, sweet lullaby, made visually extraordinary as the dancers (Marisa Bianan, Alexis Harris, Emily McKee, Andrew Niedbala, Carolyn Pampalone Rabbers, and Angel Sutton) in two pas de trois used a long piece of gauzy fabric highlighted by stunning lights from Sam Snow to twirl, wrap, tangle and untangle each other, creating powerful moments in silhouette as well as using the fabric to hold each other back and propel movement in various directions. Paired with the music it was deeply affecting.

No doubt live music heightens any dance performance compared to recorded music, but this was a true collaboration in which the dance, the music, and the singular performance became one. With brilliantly chosen music and performances, ZOFORBIT: A Voyage Through Space Piano Duet and Dance was an extraordinary experience unlike any other.