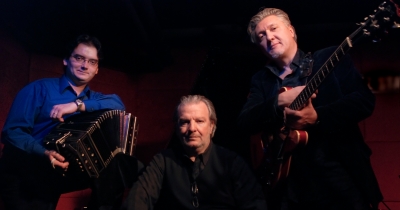 Each impassioned in his playing, together, they are electric; and in their first sold-out set Friday night at Bell’s Eccentric Cafe, a collaborative offering from Fontana and the Gilmore Festival, they roused the crowd to their feet for a standing ovation.

Their brand of Argentinian nuevo tango can be described as a spirited hybrid of classical tango, American jazz, and European art music, and their one-hour set in Kalamazoo offered a taste of what they do, with several fast milongas, which Ziegler described from the stage as fast polkas with with an Afro beat in the middle; a slow milonga with more of a folk or country influence; and original compositions from Ziegler himself, including one quite cinematic piece translated as “The Foundry,” in which mechanical-like repetition gives way to lilting interludes; as well as pieces from Astor Piazzolla, the father of nuevo tango, with whom Ziegler played for a decade as his pianist.

Ziegler paid homage to Piazzolla from start to finish, leading the group in a lovely rendition of his “Introduccion al Angel,” a beautiful melody, quite romantic and with dramatic changes in tempo early in the set, and formally ending with an equally beautiful, contrapuntal fugue from Piazzolla that was as joyful as it was mournful, with an especially gorgeous solo from Del Curto.

Despite this trio’s lack of a drum kit, their playing was remarkably percussive throughout, with Del Curto tapping the bandoneon as well as making the notes move with great speed and sharpness as he squeezed and played the instrument in more traditional ways. Likewise, Ragazzi’s Flamenco-like guitar mirrored that nimble quickness with his dynamic picking—and also often served as a kind of bass line for the performance when he wasn’t providing the melody.

In many ways, Del Curto and Ragazzi appeared to be the virtuoso performers of the evening, with exciting solo highlights speckled throughout each tune, leaving Ziegler to come off as incredibly humble. Though it was his playing, not to mention his compositions, that provided the glue that held together the solos and contrapuntal instrumentation.

In effect, this made their performances sound exceptionally complementary, though they all played against one another—in the kind of vibrant musical conversation that makes us love jazz trios, especially one as unique and exciting as the Pablo Ziegler Jazz Trio, so very much.