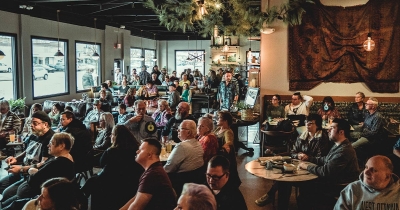 A coffee shop can be so much more than a place to drink coffee.

Especially lately, cafes have been opening around West Michigan with art galleries, performance stages, banned book libraries, community discussion nights, and much more. The Mortals Cafe, for instance, focuses resources and events around death — discussing it, embracing it, grieving it.

Newer to the scene are The Stray and Lotus Brew, two places that didn’t initially plan on their current state but were pulled into it by life’s circumstances. Now, these two coffee shops are already community staples going above and beyond.

Coffee shops that double as alternative nightlife are few and far between, but are playing key roles in expanding Grand Rapids’ selection of nighttime activities.

The Stray was inspired by the VanKlompenberg family’s realization that there weren’t many venues open to young budding artists, especially those under 21.

“We wanted an accessible venue,” said Hunter VanKlompenberg, music and arts manager, and son of owners Chip and Karen. The ultimate goal of The Stray was to be a space for people to congregate, relax, connect and share their passions.

“We want to be a community point for people to connect, and we find that people connect through the creative arts,” VanKlompenberg said. From the live music of local bands to the visual art by local artists to consignment pieces created by artists in the area, there is something for everyone to connect to.

“For it to be sustainable, it had to be a business,” he said. After debating endless options as to what kind of place would be most conducive to the environment they were trying to foster, they decided on a coffee shop.

“We all enjoy coffee shop culture,” said VanKlompenberg. “It makes people feel welcomed to sit and hang out and not have to keep purchasing something until they leave.”

After being a family business dream for over ten years, the family acquired a building that used to be an automotive garage in 2019 and began renovations. The process took over two years, with Covid effects in play up until opening in September 2021.

Turning a garage into a welcoming coffee shop and music venue environment was no easy task, but careful 3D modeling by Karen allowed for the process to be completely mapped out and designed down to the fabrics before even beginning renovation.

“There was a lot of redesign work: some parts worked for music, other parts we had to add acoustical treatment,” VanKlompenberg said. Many artistic architectural elements in the space also contribute to acoustic purposes, such as an absorbent floating platform that hangs above the stage in the corner of the seating areas.

“We were lucky that Covid happened before the majority of construction,” said Hunter. Despite supply chain freezes and increased materials prices, The Stray narrowly escaped the Covid-related issues that plagued many other businesses at the time. “If it had sideswiped us out of the blue, we would’ve sunk.”

“We have gotten an overwhelming amount of support, both from the guest side and the artist side,” VanKlompenberg said. While the guests enjoy the artisan coffee, carefully developed menu items and craft cocktails, the local artists can get their work in front of crowds in an intimate, engaged setting that allows the audience to absorb the lyrics and meaning in a unique way.

“You have an idea in your head of who’s going to come,” VanKlompenberg said. The first year of music, events, coffee and drinks was a resounding success, bringing guests and audiences out of the woodwork. “We couldn’t have imagined who we were going to meet along the way.”

The creative menu is updated seasonally, with ten percent of proceeds from summer specials going to the Harbor Humane Society, an animal shelter partnership fitting to the name of the coffee shop.

“We aim to inspire, and also be inspired,” said VanKlompenberg. They welcome and celebrate every type of artist and guest, hosting board game nights and live art shows, in addition to live music every weekend, always keeping in mind their goal of being an accessible and welcoming place. “We want to be an open space to a variety of people no matter your background.”

Another coffee shop doing a whole lot more than coffee is Lotus Brew Coffee and Dry Bar. What began as a coffee bike making pop-up appearances in the Fulton Street Farmer’s Market in early 2019 has now bloomed into a thriving LGBTQ+ coffee and tea shop, doubling as a mocktail and dry bar.

Owner Max Freeman gathered customer service, business and retail experience while city-hopping on the east coast, and after deciding to settle back down in his original home of Grand Rapids, began his coffee bike.

He thought his next step was a coffee van, and despite having the down payment, equipment and budget ready for a van, his plans changed when approached by the owner of the Communitea Wellness space to fill the streetfront of the yoga and massage studio.

“There was a huge outcry from the community for alternative nightlife,” Freeman said. Although the fairtrade coffee and tea shop was a huge success, he saw a need for evening alternatives. “There’s only bars for nightlife.”

Whether someone chooses not to drink, can’t drink for medical reasons, or just doesn’t like the bar scene, Lotus Brew has many craft mocktails, which Freeman ensured are more than just club soda and simple syrup.

Still, evenings are busier than daytime, atypical for a coffee shop, but the community loves the drawing socials, tarot reading happy hours, board game nights and trying the monthly specials of the “Secret Gay Coffee Club.”

“It’s not a secret, but if it is a secret, it’s the worst kept one,” said Freeman. Twenty percent of the earnings from the displayed specials of the ‘secret’ club go towards an organization doing great work in the community.

With community always at the forefront of Lotus Brew’s focus, Freeman began a pay-it-forward-style ‘kindness cup,’ which struggling patrons can ask for and receive for free, no questions asked.

“Seeing that struggle within our neighborhood and our community broke me,” said Freeman. He was inspired to start a food pantry, for people to take what they need, and give what they can.

“What is a story for someone can be a survival guide for someone else,” Freeman said. He houses a myriad resources related to LGBTQ+ issues, including those for parents. It is all donated, free and honor-system driven. “I don’t have the heart to limit that.”

“Folks find a safe and supportive and friendly spot here,” Freeman said. No matter what aspect of Lotus Brew draws patrons to the shop, there is something for everyone in the relaxed alternative space.

Tweet
Published in Revue Arts
More in this category: « New Tricks: Adult Art Classes in West Michigan Performance Plus: Festival of the Arts Branches Out »
Login to post comments
back to top