Performance Plus: Festival of the Arts Branches Out 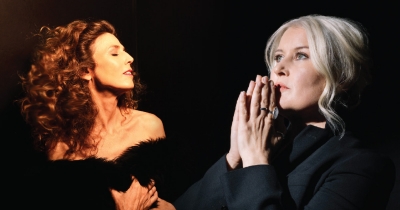 Performance+ with Paula Cole and Sophie B. Hawkins. Courtesy Photos

With the arrival of Performance+, Festival of the Arts isn’t just one weekend anymore.

Reimagining and revisiting Festival after the pandemic, board members Baird Hawkins and Mark Azkoul said the organization needs to branch out and expand their footprint, becoming a bigger part of the community.

“In these conversations with people in the public, they were saying we’re sort of like the Scottish village in the musical Brigadoon; we show up for one week out of the year and disappear again,” Hawkins told Revue.

Their first effort to branch out is Performance+, an annual fall event that will likely change over time. This year’s performance is on Friday, Sept. 16 at the Forest Hills Fine Arts Center, featuring Paula Cole, singer-songwriter with hits like “Where Have All the Cowboys Gone?” and “I Don’t Want to Wait,” which you may know from Dawson’s Creek. She’s performing with Sophie B. Hawkins, an LGBTQ+ pioneer with hits like “Damn, I Wish I Was Your Lover.” Also performing is Lucy Kaplansky, yet another masterful folk artist (and with a PhD in psychology, to boot).

But what’s the “plus” part? A masterclass, of course. Cole and Hawkins will teach this class, under an hour, talking about their approach to songwriting.

“We’ve had people ask for more education, and there’s nothing more educational than a masterclass,” Hawkins said. “Cole and Hawkins are both very, very well-known for being singer songwriters. It’s just getting somebody who can talk about how you come up with song structures and what their process is, which is really important to other people doing songwriting.”

“I see it being a very important part to everything that we do moving forward, or versions of it, things like the master class,” Azkoul added. “Festival started 52 years ago with the idea of exposing people to the arts. People could come down who had never seen the symphony, who had never seen opera, who very rarely had seen theater. Things are different now, but this whole idea of education and bringing people in, helping them expose themselves to the art and learn about the arts, that’s who we are. That’s our DNA.”

With the performance and masterclass arriving this month, we got the chance to sit down for a chat with the lovely Paula Cole. Here’s what she had to say about her part in Performance+.

What are you looking forward to with this performance with Sophie B. Hawkins?

We’ve shared the stage now several times and I’m loving it. I love her as a friend, and also as a colleague, a woman in the music business coming out at a similar time in the ’90s when it was just very much a male dominant business and we both had a lot of opinions and were strong leaders and strong songwriters. It’s wonderful to connect with someone like that.

Sometimes both Sophie and I were made fun of because of our outspokenness, so it made people nervous. I think even her music has been overlooked, and I’m there on the side of the stage and listening to these songs, which are chordally rich and complex. She uses tensions and beautiful chord changes. She plays a multitude of instruments and is a really dynamic performer. She works really hard. She’s badass.

What have you been working on lately that inspires you?

It feels like people are thinking of me a little more now, and my kids are in college so I have more time to tour again. And that feels lovely to be spreading my wings again. I welcome it. I would love to work more, and I’m writing a lot. I have a new single coming out and it’s a collaboration with Jason Isbell and John Paul White.

And then we’ll follow it up with another single with John Paul White and myself, and all those profits will go to Audubon Society. I’ve also been working on my full-length studio album that will come out fall of ‘23. So I went to LA and tracked that, using a lot of the same musicians that I’ve been using forever like my drummer Jay Bellerose, who tours with Alison Krauss and Robert Plant now. We came up in the music business together. It’s wonderful.

Do you have any thoughts on what you’ll play?

I like to vary the setlist so it’s different every night, because I get a lot of repeat customers. That variety helps us to play my favorites, but the focus is always on This Fire, just because it was such a big album and it was pivotable for people. Lately, I’ve been playing a lot more songs from my first album, Harbinger. And I’ll be releasing a vinyl version of my overlooked album Seven. I just have a personal soft spot for that album, because it’s kind of devastatingly personal and organic, and it’s very beautiful. It’s very gentle.

Anything you want to say to our readers?

I just hope you come out because I love performing live, and I feel like it’s where I really shine. That’s where you can really tell what a performer is. I’m not just my hits, I’m so much more.