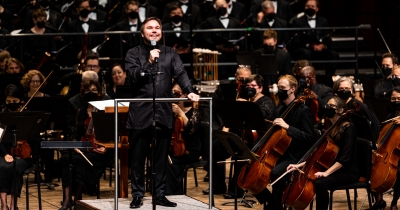 Why go to the symphony? The answer isn’t obvious. After all, there are costs: the cost of the ticket, of course, and maybe of parking, but also the cost in time; you’re committing your evening. Beyond that, minor frustrations can accrue. The maskless woman to your left has a persistent cough; the child in the row ahead of you fishes out single M&Ms from a wrapper as loud as a gong.

But the most compelling reason not to go is that recordings exist. Studio recordings allow, if not perfection, then something close to it; given multiple takes and overdubbing, groups can turn out technically flawless performances. At a live show, you take your chances.

So what led me to attend Grand Rapids Symphony’s Beethoven’s Fifth + Sarah Chang, the first concert in this season’s Classical Series? Well, for starters, it was the only way I could hear Alexander Lamont Millers’ Immortal Beloved.

Miller, assistant principal oboe for GRS, composed the piece. It seeks to dramatize, musically, an unsent letter written by Beethoven to his “immortal beloved,” a woman, perhaps aristocratic and married, who he wanted but could not have. (Today, I suppose, she’d leave her husband for him, and in time he’d leave her for the babysitter).

In Miller’s piece, selections from the letter are sung (in German; the English translation appears onscreen) as the music seeks to dramatize their emotion. The piece was elegantly structured, well-played, and sometimes very moving, especially as the chorus swelled. Unless my eyes deceived me, music director Marcelo Lehninger gave Miller a fist bump afterward, and then, in the ultimate mark of respect, blew it up.

Violinist Sarah Chang took the stage for Bruch’s Violin Concerto No. 1, a piece she knows intimately, having performed it, at the age of five, for her successful audition to Juilliard. Dressed in sparkling purple, she performed with technical brilliance and passion, tilting her head back and forth and sometimes mouthing along to the music played by the musicians behind her.

That physicality: you can’t get that at home, not even through video. After she finished, a woman to my right turned to me and said, “That was incredible.” She was right.

After an intermission, the players returned to the stage for Beethoven’s Fifth Symphony. Is there a more familiar work in classical music—in music itself? It’s the aural equivalent of Shakespeare’s eighteenth sonnet: “Shall I compare thee to a summer’s day?” Sure, it’s great, but, well, we’ve heard it.

But such is its power, and such were the skill and effort expended by the symphony, that at times it sounded almost new. The emotion suffusing the first movement was undeniable; the kid with the loud wrapper stopped going for M&Ms, even.

As the third movement ended and the fourth began, I found myself thrilled, genuinely thrilled, and I understood why we go to the symphony.

At home, there are too many distractions. You might put on a CD (or beam the music directly into your brain, or whatever kids do today). You might even listen to it, at least at first. But your phone will buzz, or a package will arrive, or a child will tug on your hand and demand to be fed, I mean, really, Dad, it’s 8 PM, and I can call CPS through the Alexa Dot.

And you’ll respond to the text message, and open the package, and feed the child, and the third movement will have transitioned to the fourth without your having realized it. You could start over, sure, but something else will jump up to distract you.

By going to the symphony, you’re committing to the music.

In its final movement, Beethoven’s Fifth embraces joy and even triumph. The Grand Rapids Symphony served the music well, demonstrating not only why the piece has lasted, but why it will continue to last. Beethoven may or may not have loved the unnamed addressee of his letters as much as he claimed to, but he certainly lavished great devotion to music, his true immortal beloved. It’s easier to understand that if you’re willing to leave the house.

Tweet
Published in Classical Music & Jazz
More in this category: « The Summer of Symphony Review: Humility, Generosity and Genius with Herbie Hancock »
Login to post comments
back to top