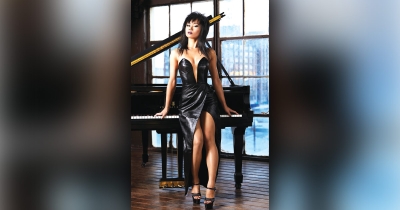 Connie Han always knew she would be a musician.

“There was no debate about it,” Han told Revue. The child of professional musicians, she showed an early talent for piano. Classical training followed; she was glad for it, but found she was especially drawn toward the idea of creating spontaneous, improved music, which jazz made space for. At 17, she became a professional musician.

Now 26, Han’s coming to Kalamazoo with the Connie Han Trio, having carved out a niche for herself as a jazz pianist both steeped in tradition and determined to brave new territory. She’s been developing her own sound for years, across four albums so far.

“Jazz is a heritage art form, and there’s a lineage that needs to be honored. It’s a language; you need to learn it. Not even thinking about ‘when am I going to sound like me.’ That’s something that comes organically—organically and methodically. I’ve listened to so much that I know now how to create my own language. It’s something that happens naturally, if you just do the work.” She paused. “I know that sounds uncreative, but it’s honestly not.”

She recognizes that jazz has changed over time. Initially, it was considered provocative and even dangerous music; now, it’s been institutionalized. “That has some good aspects: there’s money and an audience for it. But it’s also led to this cold, homogenized product. Individuality gets snuffed out, which is really ironic.”

Han hasn’t allowed the culture to shave down her own individuality. On album covers, on her Instagram account, and in concert, she dresses boldly, sexily: She wants to be seen. “I enjoy it, but it’s also a rebellion. Jazz used to be really cool! I add some sexy to it. I flaunt what I’ve got.”

The music has its commonalities with sex; after all, anyone who would master either needs to have the fundamentals down, while remaining open to improvisation. “Being human is crazy,” she said. “You can be deeply philosophical and also the most savage primal animal. Really, jazz very much is sex.”

Audience members, then, can expect an engaging show. Han’s an engaging, emotive performer. But none of that would matter if it weren’t for the music. “I’m not some bimbo, excuse my language, dressing this way to distract from my lack of talent. I have the talent. I’ve done the hard work.”

On December 11, audiences can expect music from, among others, Stephen Sondheim. Han said of Sondheim that he is one of the more provocative writers in the American songbook. “He’s one of the first musical theater writers to create a story as macabre and morbid and gothic as Sweeney Todd. He’s a really amazing modern musical theater voice.”

She will play her own compositions as well, including music from Secrets of Inanna, her fourth and most recent album. Based on ancient Mesopotamian myth, the album was inspired by Inanna, a goddess of, among other attributes, love, beauty, fertility, and war: a divine woman of earthiness and bravery who dies only to be reborn as the Morning Star.

In describing Inanna, Han refers to the goddess’ self-assurance, sexuality, audacity. Passionate and determined? That sounds like Han to me. It’s not for nothing that DownBeat magazine referred to her as “The Jazz Warrior-Goddess.” It’s a description that could sound overblown, at least until you hear the music.

But it’s best heard live, as Han has pointed out.

Tweet
Published in Classical Music & Jazz
More in this category: « Review: Humility, Generosity and Genius with Herbie Hancock Grand Rapids Symphony: Sounds for the New Year »
Login to post comments
back to top