ArtRat: A Gallery for the Community 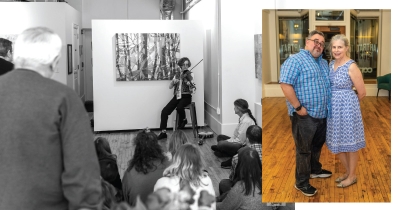 During this year’s recent ArtPrize festivities, visitors to the city may have noticed one additional venue added to their regular walking route: ArtRat Gallery. Located on South Division in the heart of Grand Rapids’ Heartside neighborhood, this brick-and-mortar storefront was inspired by co-founders Nancy Tobin and Matthew Rothenberg, the former being the gallery’s widely celebrated resident artist and a returning native to the West Michigan area.

“It was a little bit of a coming-out party for us, to actually be an ArtPrize venue,” Rothenberg said. “A couple of our artists even won.”

Included in the gallery’s awarded artists was Tobin herself, receiving a placement in the City Top Ten for her piece, High Water. A technicolor diptych with branching, tendril-like paper outlines, this particular work exemplifies Tobin’s (and ArtRat’s) overall style: Pattern, layering and color. Tobin’s iconic look and painting expertise has only grown throughout her long career, but an anticipated return for herself and husband Rothenberg to her hometown, Grand Rapids, was sure to bring up new ideas.

“I was looking for a studio space just to paint, and we had heard about Dwelling Place, so I contacted them,” Tobin said. “(They) had this space available, and I just fell in love with it at first sight. Then, the wheels started turning.”

It wasn’t long before ArtRat began to put roots down, first with its storefront opening last year, and then with its involvement with ArtPrize 2022. The gallery’s rotating collection was also frequently updated, following themes such as “Woods Walk” or “Jewel Box,” allowing Tobin to feature her comprehensive multimedia collection.

“There would be no way that we could have a beautiful gallery like this and a big storefront downtown in San Francisco where we lived,” Rothenberg said. “This is our first brick-and-mortar business.”

ArtRat is just one of many stores that have recently set up shop in the historic Heartside neighborhood. Sharing sidewalks with Premier skate shop and a stone’s throw from GRNoir Wine & Jazz, it would seem that this artsy mom-and-pop has struck gold. Afterall, their home on South Division is only a block or so from some of downtown Grand Rapids’ most popular new eateries and storefronts, like Social Misfits or Oh, Hello Co. Paper & Gifts.

And yet, Tobin and Rothenberg are concerned that, for certain downtown regulars, walking the extra block to reveal some of the neighborhood’s many hidden gems might seem daunting or untested. Even with its burgeoning thrift scene, the shopping district is lacking in foot traffic.

“Trying to position ourselves in the community seems really important,” Rothenberg said. “There’s a lot of great things in this neighborhood, and we want to tell the story of the neighborhood.”

So, the gallery has initiated several community programs to activate the district’s commercial appeal, from a weekly shop-spotlight community blog to hosting free open-mic nights (with complimentary house band and backline) for local musicians right in their gallery space. To Rothenberg and Tobin, this experiment has shown that ArtRat may be perfect for any kind of artistic performance, musical or otherwise.

“We’re thinking that serious, possibly working, musicians can play here for fun and to meet other people,” Rothenberg said. “We’re also really putting out a call to cross some genres and bring in some different groups of people to mix it up together.”

Attendees might also enjoy ArtRat’s upcoming “Americana Sundays” line-up, where regional folk and rock musicians, such as The Schrock Brothers and Drew Nelson, will perform in this beautiful, intimate setting. For select performances, free appetizers are even offered to concert-goers at ArtRat’s cross-street neighbor, Rockwell Republic.

“We’re trying to plug the neighborhood in,” Rothenberg said. “A space like this is best activated when it’s part of a community.”

For ArtRat visitors during this holiday shopping season, there’ll be plenty to get involved with, too. From the gallery’s local artist Holiday ArtMart on December 3 and 4, to the city’s incredibly popular “Shop Hop” on December 15, there is certainly a lot to look forward to. And for Tobin and Rothenberg, despite only having moved into ArtRat just a year ago, they look forward to many more years to come: For ArtRat Gallery, and for the continued growth of South Division.

“We’re not the only new thing in this neighborhood, there’s a lot that’s going on,” Rothenberg said. “If you haven’t been to Heartside in a while, it’s totally worth checking out.”