For most people, January is all about looking ahead to the future. You know, out with the old, in with the new. For books lovers however, this is the time to gorge yourself on all of the delicious diction you somehow missed in 2013. We've enlisted the help of some local literary experts to bring you The Hottest Books of 2013, your guide to staying warm, cozy and inspired until spring finally shows up.

Roni Devlin, who owned and operated Literary Life Bookstore and More for five years until its closing in 2012, now helps run the Great Lakes Commonwealth of Letters, a nonprofit that she said "encourages, promotes and celebrates the literary endeavors of writers in the Great Lakes region." As such, she chose to highlight books by regional authors and illustrators.

"It depends on my mood, I think," Devlin says of finding the perfect book. "I read a fair amount of nonfiction, both for work and for pleasure. ...But, I can only read so much nonfiction before I start having novel withdrawals, and when that happens, I have to become completely engaged by a well-written, carefully-plotted, character-driven story in order to get my fix."

Someone who knows the therapeutic value of a lengthy session of page turning, Devlin cites a comfortable fireside leather chair and a hot cup of tea as her preferred reading supplies.

Neil Rajala, who reviews books for Schuler Books and Music, enjoys a similar chair, though he's partial to an electric fireplace, which he says is "perfect for reading because you never have to get up to fiddle with burning logs." Rajala prefers black coffee as a literary companion, except when experiencing what he calls "those rare moments of harmony and peace with all of humanity and the planet we share, when I might have a cup of tea."

When asked what he looks for in a good book, Rajala's answer was simple:

"A desire to keep turning the pages," he said. "Whether it's because of the prose, voice, characters, subject or plot, that's the bottom line."

You may not have the book collection, sweet reading den or eye for literary greatness that Devlin and Rajala do, but here's some good news: Schuler Books and Music does. Anytime is a good time to enjoy the store's expansive stock and cozy reading spaces, but stop in throughout January to check out 2013's Hottest Books paired with soul-warming beverages from the Chapbook Cafe in a special display.

Matt Bell's debut novel, In the House Upon the Dirt Between the Lake and the Woods, is a modern mythical epic that chronicles a newlywed couple's retreat from the chaos of society into the supposed relief of a simple life in the woods. When the couple's first pregnancy fails however, their marriage takes a turn for the worst as Bell takes us on an provocative journey through the relationship between love, children and family. "He's an up-and-coming literary force who lives and works in Michigan's Upper Peninsula," Devlin said. "We'll see more great works from him in the near future, I'm sure."

To Drink: Cafe au Lait - Coffee with milk for the laymen. For those that don't like it too hot.

The Goldfinch
By Donna Tartt

The Goldfinch is for those who like their novels to read like a drag race, with non-stop speed until the finish line. The story begins with 13-year-old Theo Decker and his mother, who are in a New York City art museum when a terrorist attack occurs. Theo survives, while his mother is killed. But this opening salvo of intense action is only the beginning. "Sprawling and unforgettable," Rajala said of the boy's tale. "When Theo leaves the destroyed building with a priceless painting, the wild ride-of-his-life story commences and doesn't slow down for 800 pages."

To Drink: Red Eye - A double dose of caffeine for you, pumped up for the pulse-pounding action of The Goldfinch.

Bootstrapper: From Broke to Badass on a Northern Michigan Farm
By Mardi Jo Link

This memoir by northern Michigan farmer and author Mardi Jo Link shows us what happens when idealism and reality collide. Freshly divorced from a 19-year marriage and crippled financially, Link commits herself to retaining her century-old farmhouse and raising her boys off the land, despite the obstacles standing in her way. "It's slightly irreverent," Devlin said. "But I suspect it will make you laugh, and it's an honest account of a woman's love for her children and a way of life that she hopes to preserve for her family." 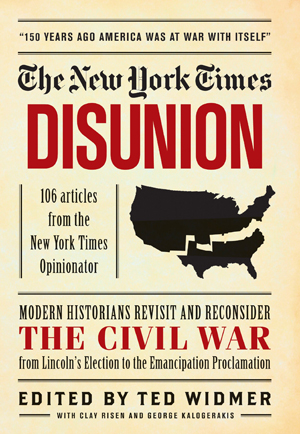 To Drink: Brewed Coffee - Fresh, pure and simple to help you, like Mardi Jo Link, get back to the basics.

Since its creation in 2010, Disunion, the New York Times' lauded online journal about the Civil War, has changed the way individuals think about one of our nation's most defining historical periods. This collection gathers the best illuminating content and commentary from the site in a single printed volume, and makes the people and events of that time come alive with intoxicatingly realistic detail. "Hundreds of articles have been submitted by historians around the world, chronicling the Civil War on a nearly day-by-day basis, from every conceivable angle," Rajala said. "If only history classes in school had been this much fun."

To Drink: Americana - Plenty of espresso here, so you won't be nodding off like you did back in high school.

If You Want to See a Whale
Written by Julie Fogliano, Illustrated by Erin Stead

Ann Arbor illustrator Erin Stead brings this tale of persistence, patience and creativity to life with her beautiful linoleum and pencil prints, which compliment Fogliano's simple tale about a boy who learns what it takes to see a whale. A 2011 Caldecott Medal winner, Stead understands the power behind the visual aspect of children's stories, and the combination of imagery and storytelling here is one that kids and adults can both enjoy. Before it's on your favorite kid's bookshelf, preview it yourself and practice for the inevitable 10,000 times you'll be asked to read it.

To Drink: Hot Chocolate - Go ahead, indulge you inner child.

The first novel by Spanish author Jordi Punti to be published in America, Lost Luggage goes like this: four brothers are born of the same father by four drastically different mothers, yet none of the brothers know that the others exist. When they find out, a journey begins that takes them across Europe in search of friends, acquaintances, girlfriends and lovers who can connect them with the man who abandoned them all. "Slowly their questions, and ours, are answered as they search for him," Rajala said.

To Drink - Mocha - Awkward family situations are seldom sweet and satisfying, but a hot cup of mocha always is.

Published by New Pages Press from Kalamazoo, this anthology chronicles the work of more than 90 poets and 30 artists from Michigan. Poetry lovers will read and reread the sharp wit and ageless wisdom collected by William Olsen and Jack Ridl, two tremendously accomplished wordsmiths in their own right. "The poems are incredibly diverse, in voice, subject and geography," Devlin said, which is fitting for a state that continues to inspire so many with its unique blend of history, landscape and culture.

Life After Life
by Kate Atkinson

Life After Life is the story of Ursula Todd, a girl who comes of age as the Second World War approaches, except that to this girl, coming of age entails a constant cycle of death and rebirth through what amounts to a seemingly infinite amount of lives. This kind of quirky originality is what has thus far defined Kate Atkinson's career, and much like her other books, Life After Life is a model of stirring black comedy. "The universe, it seems, has a plan for Ursula Todd," Rajala said. "[Atkinson] took an audacious concept and delivered a sweeping historical novel with an emotional wallop."

To Drink: Caramel Latte - OK, so you can't be reborn like Ursula Todd, but you can feel as though you were with one sip of this delicious concoction.

Furious Cool: Richard Pryor and the World That Made Him
By David and Joe Henry

If biographies that don't read like textbooks are your thing, this portrayal of one of the twentieth century's most influential and controversial entertainers is a must read. Through an exploration of both the personal and the public personas, the legendary comedian revealed to friends and family, the Henry brothers show Richard Pryor being shaped by both his environment and his influences. The book also attempts to hone in on what exactly makes a truly dynamic stand-up comedian.

To Drink: Cappuccino - Can't go wrong with this winter classic, that is, until a Pryor joke has you spraying it out of your nose.

Intuition Pumps and Other Tools for Thinking
By Daniel C. Dennett

This last selection is for those who need a break from the usual literary territory. Daniel C. Dennett, one of the world's leading philosophers, leads you on a personal odyssey through a series of brain-bending thought experiments. Which sounds intimidating, to say the least, but Dennett really intended these exercises to help readers think more clearly by revealing to them how dead wrong their assumptions about the world might be. Obvious warning: this is not escapist pleasure.

To Drink: Chai - When it's time to get serious, this is the drink to reach for.

Tweet
Published in Literary Life
More in this category: « Indulge Your Winter Reading with Spilled Ink How A Musician-Turned-Writer Found Her Natural Rhythm »
Login to post comments
back to top