Review: ‘Wicked’ is an unforgettable showcase of extraordinary talent

If there’s a Hall of Fame for Broadway, Wicked will absolutely be in it. Since debuting in 2003, the musical has become the second-highest-grossing Broadway show of all time and is nearly the 6th longest-running Broadway show.

The current three-week run of 24 shows at DeVos Performance Hall, presented by Broadway Grand Rapids, is a real get for the city. We’re part of history and people seem to know it, as nearly every seat for every performance sold long ago.

Wicked centers entirely around Elphaba, a magical green woman, and how she comes to earn the title “Wicked Witch of the West.” As a prequel/alternative to the 1939 film “The Wizard of Oz,” it flips the script entirely, showing the true story that Dorothy never sees.

The show explores Elphaba’s transition from awkward, frequently bullied teenager to powerful and feared witch, and Mary Kate Morrissey takes us on that journey expertly.

Morrissey’s young Elphaba is passionate, defensive and awkward, able to explode in anger (and magic) at any moment. She begins the story already jaded, seemingly just wanting to lay low and take care of her wheelchair-bound sister, Nessarose. The character is a little uncomfortable to watch at first, feeling just slightly too real — which is to say, Morrissey pulls it off excellently.

Where the actress really begins to shine, however, is in “The Wizard and I.” This is the first time we see Elphaba’s hopes and dreams (to meet the Wizard, impress him and become “de-greenified), but more importantly, this is the first time we experience Morrissey’s incredible, show-stopping singing. In fact, all of the best moments of the night occur when she’s given time to showcase her stunning voice, such as “Defying Gravity,” “No Good Deed” and “For Good.” Everything else seems to fall away when Morrissey has the mic.

Unfortunately, the impact of these moments was hampered by one small, but crucial problem: a lack of volume. When I visited months ago for a media preview of Wicked, we saw Morrissey and Ginna Claire Mason (Glinda) perform two songs. Even without any set, context or live instruments, I was moved to tears — that never quite happened for me at the actual show. The difference is, we were seated onstage at the media preview, so the sound was loud enough to feel the full force of their incredible voices. 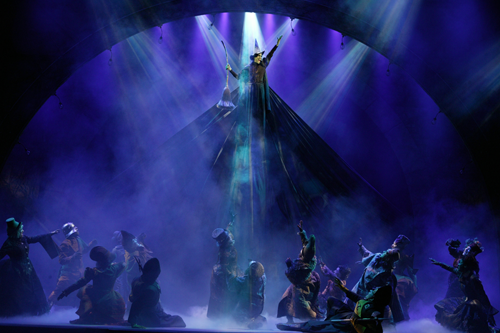 Nevertheless, the cast clearly gave it their all. Jon Robert Hall as Fiyero is a vocal force to be reckoned with. His bright, powerful voice immediately makes a lasting impression with “Dancing Through Life,” and his presence on the stage is commanding. Overall though, Hall did seem more convincing as the caring, driven Captain of the Guard than the thoughtless, apathetic student Fiyero initially pretends to be. So, as his character falls in love with Elphaba and he helps with her quest, Hall becomes more impressive as well.

However, the most memorable piece of the show is undoubtedly Glinda. Mason takes a character that could be a simple, popular blonde stereotype and gives her layers of complexity — her Glinda is funny, charming, energetic, excitable, impassioned, imperfect and more. She plays coy to manipulate others, but never with the intent to harm (aside from one attempt to embarrass Elphaba with a big, black hat). Mason’s boundless energy onstage is downright infectious, and provided a majority of the evening’s laughs.

Mason hits the comedic beats perfectly, drawing extra humor out of every line with subtle pitch changes, inflections and never-ending physical energy. I have a hard time imagining anyone executing “Popular” better than Mason, both in terms of comic and vocal talent.

On top of that, Glinda and Elphaba’s chemistry is perhaps the best part of the show. I wouldn’t be surprised if Mason and Morrissey are best friends in real life, and their rapport had me hoping for a future production of “Wicked” where the two witches end up together while Fiyero is left to find his own scarecrow wife (no offense to Hall).

That being said, it’s frustrating that Glinda so often overshadows Elphaba, who is, after all, the titular character. This is clearly the fault of Winnie Holzman’s book, however, and not Morrissey or Mason. Just as the people of Oz push Elphaba into the dark corners of society, the show itself gives more attention and care to multiple other characters.

Elphaba’s primary quest, to save the Animals who are being systemically silenced, never really amounts to much and is somewhat vague. The Wizard of Oz is suppressing the Animals, but we never find out why, or even what statement the show is trying to make. It feels political, but without really having anything to say. A similar subplot with the wheelchair-bound Nessarose restricting Munchkins’ rights feels equally vague on its message, and more like an ineffective means to an end — that end being to explain how Nessarose’s Munchkin beloved, Boq, becomes the Tin Man. 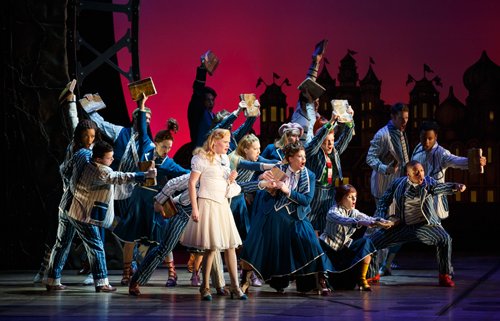 The whole story feels doubly bound — once by the desire to tie up every loose end leading into “The Wizard of Oz,” and again by a need to retain much of the show’s source material, Gregory Maguire’s 1995 novel “Wicked: The Life and Times of the Wicked Witch of the West.” Despite huge changes throughout, Holzman clearly built this show’s narrative scaffolding on the novel’s tragic structure. The novel, however, begins with rape and ends with Elphaba’s death. While I'm grateful for the musical’s more empowering and less violent beginning, its happy ending feels incongruous to me, or at least not as impactful as it could have been if the show had a clear message or if Elphaba accomplished more by the end.

And yet, I’m nitpicking, because during the show’s two-and-a-half hour runtime, none of that really mattered to me. The sets, the costumes, the lighting, the choreography and the music are all more than stunning enough to entertain, delight and impress, and that’s not to mention the performances.

Tom McGowan is an impressive force as the Wizard, perfectly capturing the character. Like many statesmen, he’s incredibly dangerous, but genuinely seems to believe he’s doing what’s best for Oz — McGowan nails that. Meanwhile, Catherine Charlebois as Nessarose is earnest, zealous and deceivingly innocent. And Sam Seferian did an excellent job conveying Boq’s underdog humor and desperate need for love, though Robin de Jesus will play the character for this run’s remainder.

At the start of the show, Isabel Keating as Madame Morrible was nearly unmatched in energy and impact. Keating brings a sincerity and consistency to the stage that make the Madame feel at once authentic and larger-than-life. Harry Bouvy also gets you to care deeply about his Doctor Dillamond in a very short amount of time thanks to his flexibility, switching quickly from comedic to empathetic to emotional. And finally, the company danced and sang with endless fervor and skill, as one would expect.

In the end, “Wicked” is a nonstop ride of fun, excitement and emotion, even if it owes much of that joy to the show’s incredible performers, beautiful sets and memorable songs, rather than the story itself. Certain scenes, and most of the songs, have been stuck in my head for days now. Simply said, “Wicked” is an experience you’ll never forget.

More in this category: « Review: ‘The Brothers Size’ is powerful, essential viewing Turn On the Lights: 'An American in Paris' explores love, healing after tragedy »
Login to post comments
back to top