Remembering John Hyatt: The man who set the stage for the Grand Rapids theater community

When John S. Hyatt passed away in April, Grand Rapids lost a man who truly lived his life for others.

Hyatt grew up in Madison, Wis., not entirely sure what he wanted to do with his life. He decided to go to Luther College for pre-med, but that didn’t last long.

“And then one day he walked into the basement of one of the buildings and there was a black box theater in there. What he says is he never came back up,” said Mary Hyatt, his wife. “He just fell in love with it. … He quit and totally switched his major to theater.”

Right after college, at 24 years old, Hyatt enlisted himself in the military. He wasn’t drafted, which meant he had some choice in what he wanted to do. He chose to go to the Defense Information School, and eventually became a photographer and editor of the base newspaper.

Mary and John met at Fort Bragg in North Carolina, where there was a reputable local theater. Mary was a high school choral music teacher in the area. When asked what first drew her to him, she referred to a show they did together, Celebration.

“Singing together,” Mary said with a smile. “You know how you just click with people? That was kind of the start of it. It was a lot of fun singing with him.”

Mary said John had a nice, “crystal clear” singing voice. In a tribute to John, Jean Bahle wrote, “John, you could grow a beard, your beard could go gray, but you never lost your boyish enthusiasm or your silvery tenor voice, a young person’s voice.”

Eventually, the two were married and after John was out of the military, they moved around before ending up in Grand Rapids. He began doing contract work for Grand Rapids Ballet, Actors’ Theatre and Grand Rapids Community College, eventually making theater design his full-time job. Fred Sebulske, founder of Actors’ Theatre, let his friend set up shop in his space.

“It was this little church backed up to the hospital,” said Mary, describing the first Actors’ Theatre. “It was just heaven. We were all stuffed in the basement, there was a dressing room and no amenities worth talking about. But we just absolutely adored the building.”
That was when John started to become part of what came to be a close-knit theater family in Grand Rapids.

Sebulske remembered one of the first sets John designed for Actors’ Theatre for The Fifth of July.

“In the space of a sliver of a stage, he conjured an entire summer cottage in Missouri, with green wicker chairs, a white clapboard multi-roomed home and garden and a screen door that banged shut just the way every cottage door bangs shut to keep the mosquitoes at bay,” Sebulske described in a written tribute. “Those of us who were in the show or even just saw it will never forget the evocative nature of the set, or the care that John poured into his work on that set.”

He became known as one of the most talented scenic and lighting designers in the city. He was kind, honest and knew exactly what he was doing. Friend Maureen Fahey Dreher said John would “give the shirt off his back” for someone without blinking an eye.

“He didn’t know he was doing that, that’s the weird thing,” Mary said. “He didn’t have a shred of vanity. Nothing. He just did what he did.”

Eventually, John started his own business: John S. Hyatt and Associates, which is still being run by Mary today. Through this, John and a team did renovations and new-installs of lighting equipment, reading equipment, curtains, control systems, — basically everything technological in a theater. Looking around Grand Rapids, John has had his hand in every theater, and even installed all-new lighting in every single Meijer location in the Midwest.

He was proud to have done work in the local museums, Steelcase, Herman Miller, Spectrum Theater and even to have gone back to his alma mater, Luther College, to redo its theaters. 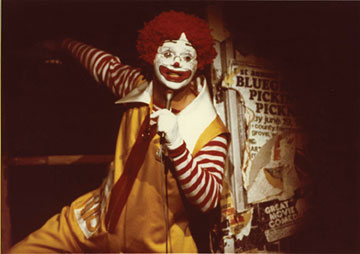 At East Kentwood High School, John installed the lighting in its black box theater. Now, there is a young girl who has a passion for lighting, and is learning off the tools John put in place.

“John installing that and having that in our school, now I’ve got students that want to do things because of how beautiful that space is,” said Scott Mellema, theater and English teacher at East Kentwood. “That space is beautiful because of John.”

Fahey Dreher said John kept himself busy, always doing work or a favor to help out a friend.

“It was always with a smile on his face,” Fahey Dreher said, adding that if he ever was angry with someone, no one ever saw it. “Seriously. His loss will be felt for a long time.”

When John married Mary, he got two young kids in the deal as well. Trey and Kai Li were just toddlers when they met John, and he became a father to them.

“He raised them, even my ex-husband says that,” Mary said.

Mary said even as adults, the kids still called John to talk life through. Trey took on John’s last name in his honor.

Trey and his sister grew up as “theater kids,” spending their weekends in the theater with John and Mary, helping out and getting involved in local productions.

“He was always there for me,” Fouts-Hyatt remembered. “He taught me a lot about carpentry, about lighting, about technical things.”

Fouts-Hyatt said he can’t help but think of John whenever he goes to somewhere like Home Depot.

“I go in thinking about John, and how John would be proud of me for doing this,” he said.

Fouts-Hyatt is also a stepfather, and he looks to John as an example.

“John was always an example of what to do right,” he said. “that’s what I’m trying to do with my own stepson, not necessarily be this person who’s like this dictator to them or tell them everything they do wrong, but just be a source of encouragement for them.”

Kai Li, meanwhile, said John always had a story or a joke to tell.

“He had a pun for every word, just to sit there and make us laugh,” she said. “He loved my mom, and that’s what was important to Trey and I. He loved my mom more than anything, and he also drove her crazy, but he respected my mother’s talents. There’s nobody that loved to hear my mother sing more than John.”

John was known at one time for having multiple buildings around the country, but he settled in Grand Rapids and ended up with a giant “warehouse full of solutions,” as Fouts-Hyatt described it. He loved theater so much, he ended up buying and living in the old Civic Theatre.

“John has always been there, not just for me, but for the effort,” said Fred Bivins, friend and member of the art community. “He would help where he could and he would loan me whatever we needed.”

Bivins would go to John’s warehouse and get to listening to his friend tell stories, and then realize hours had passed just talking and listening.

“He’d be in the middle of a job and he would just stop and talk about this or that,” Bivins said. “And that was always the wonderful thing about spending time with John, there was always a story.”

Tom Kaechele, GRCC theater professor and local director, looked up to John as a mentor after working with him as an 18-year-old. When John’s business was just starting in the early ’80s, Kaechele was often hanging around the warehouse, helping where he could.

“When I needed a little extra cash, John would always try to find something productive for me to do,” Kaechele said. “As it went on, we just kind of bonded. Working past five, I’d wind up having dinner with them and eventually I was like, this is my second family.”

Kaechele said John was an “utter optimist” and one of his greatest mentors.

“John was about solutions,” he said. “He was about finding the way to get something done, and I admired that incredibly.”

When John died at 69 years old, everyone said it was too early for him and everyone else that was lucky enough to have him in their lives.

Mary said she and her husband — who she described as “cute as a button” — were “always together.”

“The hard thing for me is my desk is feet away from his, and it was that way for (a long time),” Mary said. “He’s everywhere.”

Mary said there are a lot of couples who would think they’re crazy for spending so much time together, being married and then working together every day. But that’s how they liked it, and they just clicked. Many friends said it wasn’t just Mary or John, it was “John and Mary.”

Although she says they had “retirement dreams,” Mary didn’t think John would ever quit working. Over the past few years, the Hyatts spent a lot of time traveling and visiting the children and grandchildren.

John is survived by his wife Mary, her two children and six grandchildren. Additionally, many, many friends that still miss him dearly.