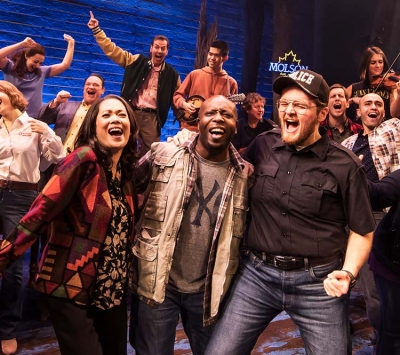 "Come From Away" on tour. Courtesy Photo by Matthew Murphy

If you’re wondering why in the world you would sit through a musical about one of the most tragic moments in American history, Come From Away will give you plenty of answers. Yes, there is pain, heartbreak and sorrow throughout the show, but ultimately, the musical shows us about hope and community — and how awesome Canadians are.

As soon as the curtain rises, audiences are taken to Gander — in the province of Newfoundland and Labrador, Canada — with the show’s opener, “Welcome to the Rock,” one of the musical’s many ensemble numbers.

Why Gander? Well, that’s where thousands of passengers were re-routed as part of Operation Yellow Ribbon after the Twin Towers and Pentagon were hit. Over the course of the day, thousands found themselves stranded there, as the population of the town went from 9,000 to 16,000. The rest of the musical tells the story of what happened the five days after.

Between Christopher Ashley’s Tony Award-winning direction and Kelly Devine’s choreography, audiences go on planes and buses with only a few chairs and a very bare stage to set the scene. The chairs, much like the characters themselves, are all mismatched. Those are the kinds of small details that make the show such a delight. They’re taken to schools and cook-outs and bars as they become as familiar with the town as its new residents do.

So, how do you portray thousands of people in only 100 minutes? (FYI, this show does not have an intermission.) You have an ensemble of a dozen — opening night included Marika Aubrey, Jane Bunting, Kevin Carolan, Nick Duckart, Chamblee Ferguson, Christine Toy Johnson, Julie Johnson, James Earl Jones II, Andrew Samonsky, Brandon Springman, Danielle K. Thomas, and Emily Walton — who seamlessly go from character to character, even if they only last a moment or two before switching to someone else.

Most of the characters in the show are based on, and oftentimes share the names of, very real people. Irene Sankoff and David Hein — who wrote the book, music and lyrics — actually went to Gander in 2011 to interview residents and those returning for the 10th anniversary.

Speaking of the duo, part of the beauty of their book, music and lyrics is that the subject matter may be sad — no one is denying that — but they also recognize that the next day, the world had to begin to process and come together. One way they do that often in the musical is through laughter. There is a lot of comedy in this show, especially in numbers like “28 Hours/Wherever We Are” and jokes about the town itself. For example, one character wants to steal a bunch of grills for a cookout but everyone offers him tea and their own grill to take.

At its heart, this is the very definition of an ensemble show from start to finish, an important factor when you have a musical about a place that came together like it did. You could throw any combination of people together — and it seems like just about every combination possible is done throughout — and those harmonies would make you swoon, whether it be in more up-beat numbers, like the aforementioned opener, or “Prayer,” a breathtaking ballad.

Over the course of three minutes, “Prayer” brings together much of the cast, and lets Thomas and Samonsky, two of the show’s strongest vocalists, shine as they harmonize together. The whole number focuses on people and their varying faiths, and there’s something so stunning about the simple idea of people still having faith after going through all they had. Just get the tissues ready for that one, because it will sucker punch you right in the feels. Actually, have tissues nearby throughout most of the show.

Even though Come From Away is very much an ensemble show, I would be remiss to not name a few select standouts. There’s Johnson’s Beulah, who from the get-go brings so much warmth to her character and everyone she interacts with. She, along with Carolan, both have such a strong leadership presence to their characters, two who took charge in the face of disaster. Then there’s Jones, who has the silkiest of baritones and the most expressive facial expressions, and Aubrey as Beverly, a character who gets one of the show’s few true solos, “Me and the Sky,” and knocks it out of the park.

Then there’s Duckart, who not only plays up a lot of comedic beats as part of a couple with Samonsky — both are named Kevin and are hilarious — but he also carries a lot of the show’s dramatic weight while portraying a Muslim traveler. Come From Away doesn’t shy away from what the aftermath of 9/11 meant for people who were Muslim and the prejudices that came with it. Duckart lets you feel every ounce of that traveler’s humiliation during a moment towards the show’s end and the unease he felt when people stared at him too long just for looking the way he did. While some of the people of Gander made him feel at ease once back in the real world others weren’t so kind.

While Come From Away is full of laughter and light and so much heart, it doesn’t ease up on the fact that the world did change after 9/11. People’s views of others switched drastically and fear seemed to be lurking around every corner.

But musicals like this — that showcase real people from a small Canadian town who took in thousands of complete strangers, into their homes and their schools and their ice rinks with open arms — also shows that in times of tragedy can come the best of humanity. No agenda, no “what will I get out of this,” but people truly coming together and embracing those around them in any way possible.

And the musical does that in such a way that by the end of the show, you might feel like an islander too.

Tweet
Published in Theatre
More in this category: « Review: Barn Theatre’s ‘Evil Dead’ is an instant cult classic Review: Actors' Theatre proves ‘Hedwig and the Angry Inch’ was ahead of its time »
Login to post comments
back to top