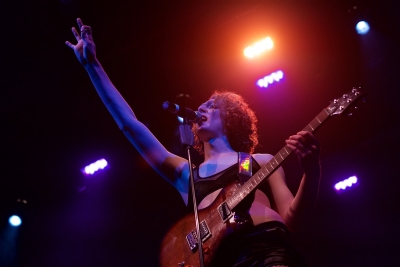 "Hedwig and the Angry Inch" at Actors' Theatre. Courtesy photo

Fast forward more than 20 years, a Broadway hit and film adaptation (not to mention Ru Paul’s Drag Race,) West End and International productions later, and even Grand Rapids is ready to embrace this terrific show. What’s more, this essentially two-person show (with a kick-ass band on stage), in production at Actors’ Theatre, features two actors who identify as she/her, made explicit in the program.

This, thankfully, is the world in which we now live. The gender identity of the performers is neither here nor there, and remarkably — though “Hedwig” is perhaps not as shocking or thrilling or groundbreaking as it once was — has little impact on the overall effect of the show. It’s a funny, delightful, fascinating, poignant, tragic, inspiring story (written by John Cameron Mitchell, who originated the role and starred in the film, and built upon a killer glam rock and punk influenced score by Stephen Trask).

And under Jolene Frankey’s direction and Wright McCargar’s music direction, Matty Owen as Hedwig and Emily Diener as Yitzhak put on one hell of show — with fictional and real back-up band The Angry Inch (which also refers to what’s left between Hedwig’s legs post surgery), and vocally knock it out of the park. And the unfussy set by Claire Bouwkamp, lights by Catherine Marlett Dreher, and projections by Anthony Churchill heighten the overall atmospheric gritty effect.

Not even a power outage that canceled the show’s opening at Spectrum Theater could keep this show down. Though opening night was delayed, and Owen had to warm up to the audience a bit before fully owning the stage (and the aisles as she meandered through, seducing the crowd, nearly one by one), and her accent sounded more vaguely Balkan than German, by the end of the fast-paced, 90-minute one act, her performance was exhilarating.

In a brilliant winged blond wig and makeup by Scott McGuire and Jace Heidel and a sexy, revealing denim skirt and bustier by William Dunckel, Owen fully embodies Hedwig in all Hedwig’s beyond-gender glory.

Emily Diener is equally fabulous as Yitzhak, Hedwig’s codependent husband, assistant and back-up singer, whom Hedwig verbally abuses throughout the show as she tells her life story while intermittently peeking in on the performance of her former lover, the much more famous and successful Tommy Gnosis, who stole Hedwig’s songs, bringing him fame.

But when Diener and Owen sing together, it is electric. In fact, regardless of one’s interest in the subject matter or characters, this show is worth seeing for their phenomenal musical performance alone.

It is so stellar, little else matters.

Tweet
Published in Theatre
More in this category: « Review: ‘Come From Away’ looks at tragedy from every angle with soul-stirring talent School of Laughs: A local training center is preparing the next comedians, actors and regular Joes »
Login to post comments
back to top