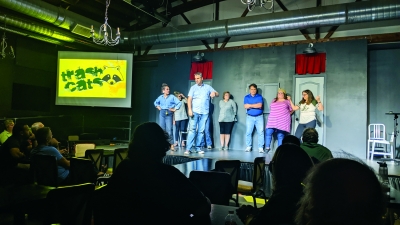 Amy Gascon, training center director at The Comedy Project, said there are three programs: sketch writing, improv and comedy performance. Each consists of four levels, and each level is eight weeks, so they’re plenty in-depth.

For the sketch writing class, Gascon said the students are learning how to produce and perform short skits, not stand-up.

“They’re learning how to write scripts that are about five minutes long and play with different character choices and different points of view and working with satire and all those kinds of things,” Gascon said.

Each week, students in the class are assigned to write a scene with varying themes and objectives. Each program concludes with a performance, with the writers doing a table read of their scripts. The other programs, comedic performance and improv, end in final performances as well.

While Gascon said most students in the writing class aren’t interested in performing, the teachers at TCP still encourage students to step out of their boundaries.

“We do encourage our performers to take the writing classes and vice versa, because the skillsets really do inform each other,” Gascon said. “It just makes you a more well-rounded performer.”

Students in the programs have a chance at the end of their training to audition for the mainstage Revue Cast, performing Friday and Saturday nights at the comedy club.

“We’re ideally looking for people who can write and put up content and aren’t just actors,” Gascon said. “We’re looking for those triple-threat type of people.”

But not every student in the program has an end goal of making comedy or performing their career path. Most students, in fact about 60 to 70 percent of them, are taking these classes as a hobby.

Laura Bergells, 56, is in the sketch comedy writing class. By day, she works as a “storyfinder,” helping companies tell their story through writing and other mediums. She said she took the class to “strengthen a muscle.”

“We all want to make each other's work better,” Bergells said. “When you’re in a room with a lot of people, that motivates me.”

Bergells said there’s a benefit from having your work viewed by those of a different race, gender, age and life experience than you.

“Sometimes we have these conversations that your sense of humor and my sense of humor—what makes me laugh might not make you laugh,” Bergells explained. “It’s not necessarily universal. And we’re having some of those discussions about why that is and how that is and is it appropriate for me to tell that story, the middle-aged Midwestern woman?”

Charlie White, 40, is entering the third level of the improv program. He said he’s done improv before, but he’s never felt “good enough” to participate with others, much less be in a program at a comedy club.

White would think, “All of these people are so much funnier than me, so much smarter than me, I don’t belong here.”

“Fortunately, in the second class, I was quickly able to follow that up with, ‘I recognize this feeling, but it’s gonna be a lot of fun if I stick around,’” White said.

Doing improv taught White how to trust others around him in the scene and conversation, as well as how to be more aware of his own thoughts and actions.

“There’s a surprising amount of connection to mindfulness and meditation,” White said. “This ability to observe an action and then define a reaction, rather than be compelled to react.”

This month, 47 students make up the fourth group that are beginning their programs since the center launched in March. Only about 30 percent of them will go on to pursue comedy, acting or some type of entertainment career path.

Gascon said the training programs are a great way for people to find their own little community in Grand Rapids.

“If you’re interested in making friends, that’s something to do here,” Gascon said. “Grand Rapids is so much more accessible than some of the other cities. So, if you want to put something up, you can do that pretty quickly here.”

As the Training Center grows, Gascon would like to offer musical theater and clowning classes, but especially would love for it to be “a more diverse group of people.

“Some more representation of our Grand Rapids communities, that’s how I would like to see it grow.”

Tweet
Published in Theatre
More in this category: « Review: Actors' Theatre proves ‘Hedwig and the Angry Inch’ was ahead of its time Colorful Choreography: ‘For Colored Girls’ dives deep into the lives of women of color »
Login to post comments
back to top