Colorful Choreography: ‘For Colored Girls’ dives deep into the lives of women of color 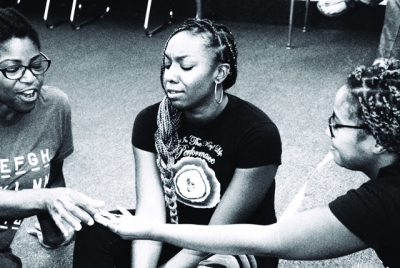 Ebony Road Players’ new show tells stories all about the experiences of women of color, and the theater group says the stories are for everyone to hear.

The “choreopoem” For Colored Girls Who Have Considered Suicide / When the Rainbow Is Enuf is a set of 20 unique poems choreographed to music. It focuses on seven nameless women only referred to by their colors: Lady in Red, Lady in Orange, Lady in Yellow, Lady in Purple, Lady in Green, Lady in Blue, and Lady in Brown.

Amisha Groce is the director of the performance. She said the show doesn’t normally follow a storyline, but she has made it so each color is a consistent character, and the audience can follow their story throughout the show.

“Abortion, sexuality … abuse,” Groce said, listing some of the themes. “From woman to woman, they all kind of blend together and touch on similar subjects, depending on the poem.”

Other subjects touched on include AIDS, city living and joy.

“A lot of it is heavy issues,” Groce said. “But I think she put joy in there intentionally, and it does end on a high note. The exact lines are, ‘I found God in myself and I loved her.’”

The 90-minute choreopoem was written by Ntozake Shange and premiered in 1976.

“What’s amazing about it is, it doesn’t matter what decade you look at,” Groce said. “Everything is relevant from the beginning of time to now, in terms of what a woman’s experience has been like.”

Micah McDonald, one of the two men in the show, plays the character Beau Willie, an aggressive and abusive boyfriend. He said it feels uncomfortable at first, but he has learned how to take a different perspective and get into character.

“Before I start the scene, before I go into it, I try to put myself in a specific headspace,” McDonald said. “So I kind of let go of everything that I am to enter into that mindset.”

Thinking about women in his life who he’s seen struggle and be mistreated, McDonald reflects on how the themes of this show still ring true today.

“The most mistreated person is the black woman in every single way,” McDonald said. “Not just by white people and the oppressions of slavery, but even as time has moved forward, the black community itself mistreats black women.”

McDonald said he hopes the audience walks away having learned something.

“It’s hard to disagree with experience,” he said.

Ja-Nay Duncan, who plays Lady in Blue, said she relates to the show, which she feels is a “tiny window” into who black women are.

Duncan moved to Grand Rapids about a year ago and recently found her home at Ebony Road.

“It felt so good to be welcomed into the theater community again with open arms,” she said. “There was no doubt in my mind that I was going to audition for this show. Everything that the show represents, the theater itself being owned and run by black women, I was just almost on fire with excitement and then I got cast and I couldn’t believe it.”

She said it’s nice that this show puts a spotlight on black women and their unique experiences, good and bad.

“As a woman of color, it’s refreshing to come to an event that is all about you,” Duncan said.

Obviously, while the show highlights a certain experience, the stories are for all to hear — men, women, everyone alike.

“I hope that it starts a conversation or continues a conversation,” Groce said. “Not just about women’s issues, but what we can do as a society as a whole to make it a better experience for women to feel safer, for our little girls.”

Tweet
Published in Theatre
More in this category: « School of Laughs: A local training center is preparing the next comedians, actors and regular Joes Sparking the Flame: ‘Firebird’ aims to show what the Grand Rapids Ballet can do »
Login to post comments
back to top