Sparking the Flame: ‘Firebird’ aims to show what the Grand Rapids Ballet can do 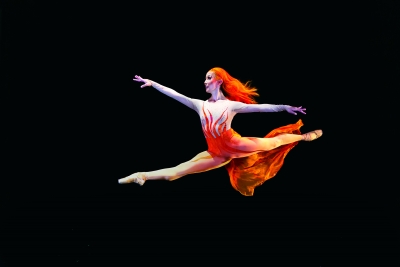 Having gotten lost in a great forest, Prince Ivan finds himself in the realm of Koschei the Immortal, a terrible villain whose soul lies hidden inside an egg. The prince falls in love with a princess, triggering Koschei’s wrath. It is only through the intervention of a firebird, who has herself fallen for the prince, that the egg is destroyed and happiness gained.

The above story, a mashup of Russian folktales, was the basis of Stravinsky’s 1910 ballet The Firebird. The opera will serve as the cornerstone to an upcoming Grand Rapids Ballet performance, titled Firebird, which in its four pieces will display much of the art form’s range.

The Stravinsky piece, reimagined by San Francisco Ballet’s resident choreographer Yuri Possokhov, offers an entire production’s worth of features: fog, quick changes, an exploding egg. The dancing, while steeped in classicism, has moments of contemporary brio, including a deep lean back before Princess Tsarevna slides through the prince’s legs. “You wouldn’t see that in Swan Lake,” Grand Rapids Ballet Artistic Director James Sofranko told Revue.

Josue Justiz, who will dance as Prince Ivan, attributes some of the looseness of the dance to the original composer.

“Stravinsky is very mysterious,” said Justiz, adding that he wants to reflect that mystery. To him, the most vital thing dancers do is translate music to motion. That motion will be elegant, powerful and sometimes extreme, Justiz said, with “crazy lifts and running onstage. It’s pretty athletic.”

Audience members should anticipate a large, full, grand show, anchored by beautiful music and gilded with fine costumes and sets, both of the latter on loan from San Francisco Ballet. Dozens of dancers will be onstage.

The folk tale imagery and story help make The Firebird accessible to young audiences, but Sofranko emphasizes there is realism, too.

“Watching it, you never say, ‘Oh my God, this is ridiculous,’” Sofranko said.

The firebird, after all, loves the prince, but in saving him helps him to win the love of another. It isn’t Cordelia getting hanged, but it’s tragic, in its way. Asked if audience members need to know the story before seeing the performance, Justiz said the performance should speak for itself.

“If I do my job correctly — if we do our jobs correctly — you don’t need to know the backstory. The characters are so well-drawn,” he said.

While central, The Firebird is not the only piece to be performed. Sofranko’s Mozart Symphony will provide a traditional, restrained piece. To help balance the evening, it has no fog and no magical eggs. “It’s lights and tights,” Sofranko said.

“Mozart is very musical, very precise,” Justiz added. “Every piece has to be perfect.”

Adam Hougland’s piece Cold Virtues won’t be anchored by a story, but rather gestures toward a story in its own way. It dramatizes how people manipulate their way into society and is set to music by Philip Glass.

Finally, a new piece by Grand Rapids Ballet choreographer-in-residence Penny Saunders will have its world premiere. Saunders’ past work has been kinetic, contemporary and beautiful. Audience members should expect those qualities to be present again here, in a visual representation of a couple leaving their profession.

Preparation for such a diverse show consists of more hours and more energy than those outside of ballet might credit. Justiz will rehearse seven hours per day for more than eight weeks. Every costume on loan for The Firebird has been altered, and at the end of the performance, each will be altered back. Dancers will not only be learning their steps, but learning how to embody their characters and the music itself.
Justiz has no doubt the efforts will be worth it.

“It’s amazing how supportive this community is of ballet. It’s one of the first things that struck me when I came here,” he said.

In Miami, where he danced previously, that support wasn’t always as evident. Here, even the cab drivers tell him how much they love The Nutcracker.

“I predict people are going to walk away saying, ‘I can’t believe I witnessed all that in one evening.’” Sofranko said. “Ballet’s not this elite art form, and it’s not just for little girls. It’s for everyone. I think it’s amazing to get to show audiences just how good our dancers really are.

Tweet
Published in Theatre
More in this category: « Colorful Choreography: ‘For Colored Girls’ dives deep into the lives of women of color Sensory Sensation: Pilobolus is a dance company that doesn't hold back »
Login to post comments
back to top